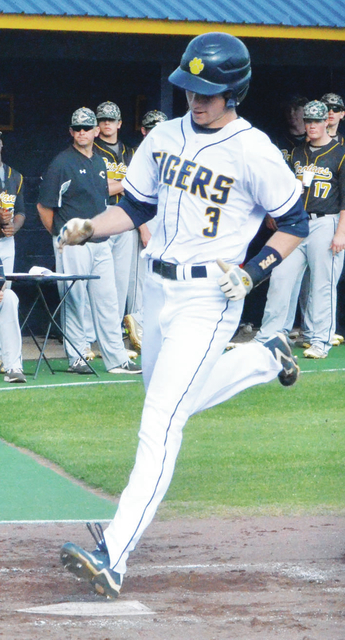 Troup’s Miles Cameron takes a swing during a game against Carrollton last week. Cameron will test himself against some elite pitching this week in the IMG National Classic. Kevin Eckleberry | Daily News

http://lagrangenews.com/wp-content/uploads/sites/37/2016/03/web1_troup-cameron.jpgTroup’s Miles Cameron takes a swing during a game against Carrollton last week. Cameron will test himself against some elite pitching this week in the IMG National Classic. Kevin Eckleberry | Daily News

Bo Halcomb, a standout hitter and pitcher for Troup, will look to lead his team to success in this week’s IMG National Classic. Kevin Eckleberry | Daily News

http://lagrangenews.com/wp-content/uploads/sites/37/2016/03/web1_troup-halcomb.jpgBo Halcomb, a standout hitter and pitcher for Troup, will look to lead his team to success in this week’s IMG National Classic. Kevin Eckleberry | Daily News

For the past three springs, the IMG Academy in Florida has hosted the IMG National Classic, an invitation-only event that features some of the top baseball teams and programs in the country.

There are two tournaments during March at the IMG facility in Bradenton, and the Troup Tigers will be a part of the second one that gets under way on Tuesday.

Troup head coach Craig Garner received the invitation during the summer, and the schedule worked out nicely since the tournament takes place during the school’s spring break.

So the Tigers will be one of 10 teams participating in the tournament that goes through Friday.

“It’s going to be a stepping stone for us, and something that we want to try to get back to, and maybe do some other tournaments and things like that,” Garner said. “And I think it’ll be a great team-building trip.”

Garner said the folks in charge of the tournament looked at teams that were ranked nationally at one point last year.

The Tigers went 25-6 last season, and most of the starters from that team are back this year, which is something the tournament organizers looked at as well.

“They researched those teams out, and sent out invites to come to one of these two tournaments,” Garner said. “And fortunately enough, we got an invite.”

Seniors Bo Halcomb and Miles Cameron said the players are looking forward to testing itself against some elite competition.

“I’m excited,” said Halcomb, who pitched into the sixth inning of Friday’s 11-1 win over Carrollton. “We get to see how good we really are personally, as well as a team.”

“We can gauge our offense, see how good we really ard, facing that kind of pitching,” Cameron added.

Garner said the invitation is based not just on what the Tigers did last season, but on the program as a whole.

This is his 15th season at the helm, and the Tigers have been in the state playoffs 12 times, and they made back-to-back trips to the final four in 2012 and 2013.

This year’s team, which has been ranked in the top 10 in Class AAAA all season, is 10-3 overall, and it is tied for first place in Region 5-AAAA with a 5-1 record.

Cameron and Halcomb have been a part of a bunch of wins over the past four seasons, and they’ve helped the program continue to prosper.

“We’re proud to be a part of a program that’s growing, to see it get this recognition,” Cameron said.

Halcomb said getting an invitation to a pretigious tournament shows how far the program has come.

“It definitely shows that,” he said. “I feel real proud to be a part of this.”

The Tigers head into the tournament playing well.

Since dropping back-to-back games to fall to 3-2, Troup (10-3) has won seven of its past eight games, and it bounced back from a home loss on Wednesday to run-rule Carrollton on Friday.

The Tigers will, though, be at less than 100 percent in the tournament, with some of their key players unable to go for various reasons.

“We’re going to be banged up and short-handed,” Garner said. “We’ll have four starters out. But we’re going in with the intention of playing to the best of our ability. It’s tough to sit here and say right now with four starters out that you have a great shot, but we’ll do the best we can, and hopefully we can find some others that step up and make us stronger in the long run.”

Troup will play its tournament opener on Tuesday at 4 p.m. against Windermere Prep (Fla.).

All of the teams will play four games, and the championship game will be on Friday at 1 p.m.

WHEN: Tuesday through Friday