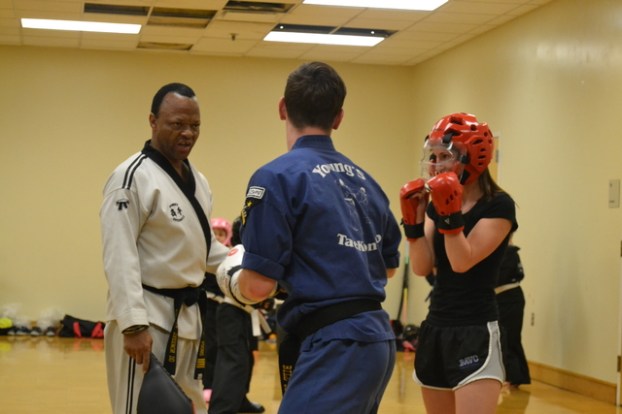 Taekwondo instructor Toby Young talks to students Bill Singleton and Laura Hayhurst during a class at the Mike Daniel Recreation Center. This year marks a decade that Young has been teaching martial arts in LaGrange.

http://lagrangenews.com/wp-content/uploads/sites/37/2016/03/web1_DSC_0359.jpgTaekwondo instructor Toby Young talks to students Bill Singleton and Laura Hayhurst during a class at the Mike Daniel Recreation Center. This year marks a decade that Young has been teaching martial arts in LaGrange.

LaGRANGE — It’s a Thursday night as Toby Young teaches a rambunctious group of students in his taekwondo class at the Mike Daniel Recreation Center, but he still takes time to greet all the parents watching. He makes sure to interact with everyone, going around and shaking hands with each adult.

He jokes with his students, even “dabbing” — a dance move Cam Newton performs after scoring a touchdown — to the delight of the kids.

Before students split into pairs to begin practicing, Young tells them, “Before you fight, you have to know how.”

He observes all the students, talking to them, giving them advice and occasionally disciplining them.

It’s a practice he’s been applying for 10 years now in LaGrange, but Young has taught taekwondo for a total 35 years. He started learning taekwondo as a freshman in college.

“I loved the idea of Bruce Lee,” Young said.

He started teaching because of his instructor.

“I admired him so much,” Young said. “He had a common goal, and he treated everybody the same.”

When he first started teaching, Young only had two students for two months, and he worried that he had chosen the wrong profession, but he stuck with it.

Now, Young teaches taekwondo to students from the age of 5 to 52, and he has classes in LaGrange and Carrollton. He also teaches special needs students.

He wants student to “accept discipline and learn self-respect,” he said.

He does more than train students. He also does outreach with the kids. They visit senior centers and Boys and Girls clubs. Young wants to teach kids “not just to perform but also to give back,” he said.

Anna Bailey, one of Young’s students, said she wanted to learn taekwondo “because it teaches you respect and how to defend yourself if you need to.”

“He’s very fun,” Bailey said of Young. “He likes to play with the kids a lot.”

Abby Maddox has been learning taekwondo for six years. She started “because I wanted to learn to defend myself.”

She also enjoys being “surrounded by talented people,” and she called the classes “very fun.”

Maddox and Bailey both won several awards at a recent championship.

Young has four students going to Detroit to compete in the National Karate Commission for the world team trials. The top four finalists will go to Ireland for competition.

But for Young, that’s not the biggest accomplishment of his career.

“That would be big for students. It would be monumental,” he said. “But my biggest accomplishment is working with special needs students and getting them to feel confident.”

Young said he wants to build the self-esteem of all his students because it will “be with them for life.”

“I like helping people so much,” he said. “It’s like my mom and grandma said, ‘It’s not how much money you make, it’s who you help on the way.’”