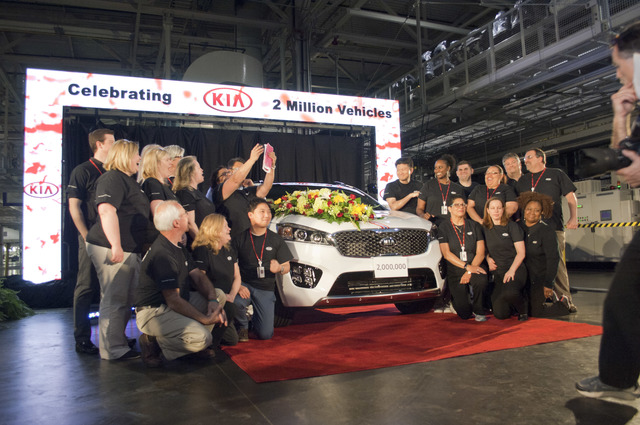 Employees of the Kia Motors Manufacturing Georgia plant pose for a photo Tuesday with the 2 millionth vehicle to come off the assembly line. The plant began operation in November 2009 and is the largest employer in Troup County.

http://lagrangenews.com/wp-content/uploads/sites/37/2016/03/web1_Kia2Million01WEB-3.jpgEmployees of the Kia Motors Manufacturing Georgia plant pose for a photo Tuesday with the 2 millionth vehicle to come off the assembly line. The plant began operation in November 2009 and is the largest employer in Troup County.

Kia Motors President and CEO Hyun-Jong Shin drove the white 2016 Kia Sorento SXL off the assembly line during a press conference about 10:45 a.m., temporarily stopping the assembly line as workers gathered to celebrate the feat.

“Assembling 2 million vehicles in less than seven years is a remarkable achievement,” he said in a written statement. “The world-class quality that goes into every Sorento CUV (cross-over utility vehicle) and Optima midsize sedan we build is a direct result of the hard work and commitment of our team members, and today we salute their commitment to excellence.”

Drew Ferguson, who was mayor of West Point when the plant began operation Nov. 16, 2009, attended the ceremony and called the event a “milestone, not only for Kia, but also for the employees.”

“It’s symbolic of the stability we’ve found in our community,” he said. “It’s about creating jobs, and economic activity. It’s about our people in this region rebuilding their lives, re-establishing the middle class and being a wonderful place to live.”

Ferguson, who is vying to be the Republican candidate on the Nov. 8 general-election ballot for the 3rd Congressional District, also said the plant has impacted the state as a whole.

“Kia means the world, not only to West Point and Troup County, but it has a profound impact on the entire West Georgia region, the 3rd Congressional District and the state of Georgia,” he said.

KMMG has invested more than $1.1 billion in the local economy, according to a statement from KMMG. The manufacturer is the largest employer in Troup County and produces more than 40 percent of all Kia vehicles sold in the United States.

The 2 millionth car will be shipped to a dealership in West Virginia for sale, according to Patrick Sands, a spokesman for KMMG.

Together with on-site suppliers, KMMG creates more than 15,000 jobs in West Point and the surrounding area.