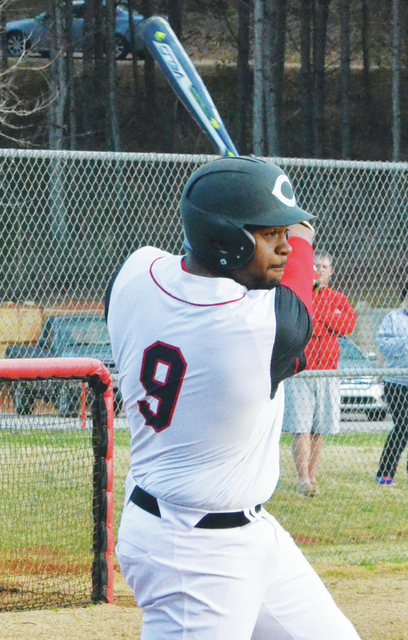 Cortney Laye and the Callaway Cavaliers are 4-2 in Region 5-AAA, and they’re in second place, two games behind Cedartown. Kevin Eckleberry | Daily News

http://lagrangenews.com/wp-content/uploads/sites/37/2016/03/web1_CHS-laye.jpgCortney Laye and the Callaway Cavaliers are 4-2 in Region 5-AAA, and they’re in second place, two games behind Cedartown. Kevin Eckleberry | Daily News

HOGANSVILLE – Just keep the Cedartown Bulldogs in their sights.

For the moment, that’s the goal for the Callaway Cavaliers, who are two games behind the Bulldogs in the Region 5-AAA standings.

It has been a fantastic season for Cedartown (15-1), which has only dropped one game overall and is sitting atop the region standings with a 6-0 record.

Callaway, at 4-2 in the region, is Cedartown’s closest pursuer.

Those two teams will meet three times in the final week of the regular season, and Callaway is hoping to still be in the title hunt when those games come around.

Callaway won the region title a year ago, but that was a much different team.

The Cavaliers were a senior-dominated team last year, and they had three lock-down pitchers who gave them a chance to win every day.

Many of those players are gone, including the three pitchers, but Callaway is still finding ways to win ballgames, although head coach Dusty Hubbard said the margin for error is a small one.

In Friday’s doubleheader against Central-Carroll, Callaway won the first game 3-0 before dropping the second game 3-0.

“Our games against Central-Carroll, those two games, they kind of summed up the kind of team we are,” Hubbard said. “The first game, we executed offensively. And we played good defense. The second game, we got about the same amount of hits, but we didn’t execute, we didn’t get guys in from third with less than two outs. We made one costly error. And it shows if we don’t do that, we’re not good enough to overcome it. That’s kind of what I told our guys. I’m not saying we have to play the perfect game, but we have to do the little things right, or we’re not going to be very successful.”

This is mostly the same group of players, and there’s a new coach calling the shots.

“Everybody I talk to says they can hit,” Hubbard said. “They have a new coach, and that probably makes a difference. And they didn’t lose anybody to graduation.”

In this week’s games, Hubbard will likely send Josh Hanson, Dylan Johnson and Slone Raper to the mound once again.

Those three pitchers all did a nice job in last week’s games against Central-Carroll, and Johnson three a complete-game shutout in Friday’s 3-0 win.