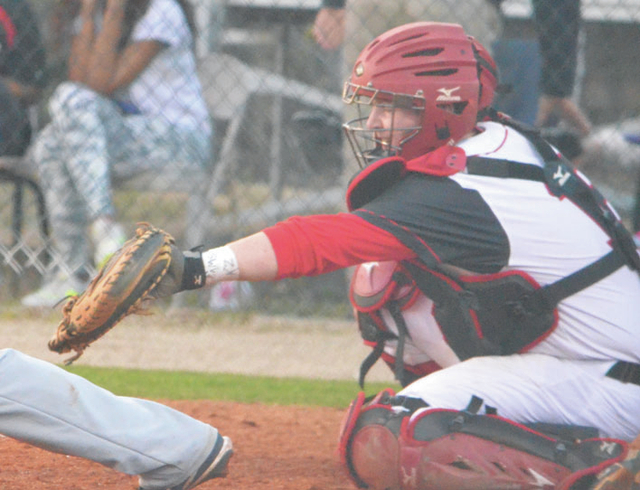 Senior Hunter Rollins is a key player for the Callaway Cavaliers as a catcher, pitcher, and hitter. Kevin Eckleberry | Daily News

http://lagrangenews.com/wp-content/uploads/sites/37/2016/03/web1_CHS-rollins4.jpgSenior Hunter Rollins is a key player for the Callaway Cavaliers as a catcher, pitcher, and hitter. Kevin Eckleberry | Daily News

Hunter Rollins has done a terrific job out of the bullpen for the Callaway Cavaliers. Kevin Eckleberry | Daily News

http://lagrangenews.com/wp-content/uploads/sites/37/2016/03/web1_CHS-rollins.jpgHunter Rollins has done a terrific job out of the bullpen for the Callaway Cavaliers. Kevin Eckleberry | Daily News

HOGANSVILLE – When the 2015 season came to a close, it was time for a group of Callaway players who had enjoyed so much success over the years to bid farewell to high-school baseball, to hang up the uniform for the final time.

When the Cavaliers lost in the quarterfinals of the Class AAA state playoffs, it was the swan song for a talented and experienced group of seniors.

One of the players who wasn’t about to graduate, who had another season as a high-school player to look forward to, was Hunter “Juicy” Rollins.

Rollins was a junior on that team last spring, and he was a catcher and pitcher.

He played a key role for the Cavaliers last season, but with so many seniors, he wasn’t someone that was counted on to occupy a leadership position.

Once that season ended, though, Rollins knew his role was about to change in a big way.

No longer would he just be one of the guys.

When the Cavaliers returned for the 2016 season, Rollins would be a veteran, he’d be one of the old guys in the clubhouse, a player who’d been through the grind of a season plenty of times before.

Rollins was about to become a leader, and that’s a responsibility he took seriously.

So when the 2015 season concluded, Rollins began to prepare himself, both mentally and physically, to be the sort of player his teammates could look up to, and that his coaches could unequivocally rely upon.

“I kind of started getting ready at the end of last season,” Rollins said. “I got in the weight room and tried to get bigger and more in shape. I know that there weren’t any more catchers besides me. I knew I’d have to do a lot behind the plate this year.”

He lost about 30 pounds and added muscle, and he has been a fixture behind the plate while providing a key presence on the mound as well, and he’s been one of the team’s most clutch hitters.

As for his duties as a veteran, as a pace-setter, he said he has “tried to be a lot more vocal,” and to “just be smart, and be a leader.”

The hard work has paid off.

Rollins is having a big senior season.

He’s been getting it done defensively at catcher, he’s been a lock-down pitcher out of the bullpen, and he’s been one of the team’s top hitters who has come through with a handful of clutch hits.

Callaway head coach Dusty Hubbard said Rollins’ contribution to the team has been invaluable this spring.

“He’s been huge, catching, and pitching, and he’s done a great job hitting,” Hubbard said. “We really didn’t expect him to hit the way he has so far. He’s been a guy who’s gotten clutch hits.”

Rollins enjoys being anywhere on a baseball field, but where he feels most at home is behind the plate loaded down with the catcher’s gear.

“It’s my primary position,” he said. “It’s what I look forward to playing every game.”

“I like being able to see the whole field, and be able to be vocal on the team, and be loud, and, between us nine, be the coach on the field, be the one telling everybody where the ball’s going, where the runners are, and where everybody needs to line up and stuff like that,” Rollins said. “That’s kind of a catcher’s job is to be the leader on the field when the coach can’t.”

Rollins is also leading at the plate.

He’s a tough out, able to work deep into counts, and when he gets two strikes he’s been effective.

“I’ve had some big hits,” he said. “I’m a big two-strike hitter, too. I like hitting with two strikes, battling, popping it over the first baseman or the second baseman’s head. That’s my main goal usually, just hitting it to the right side of the field.”

While Rollins is mostly used as a catcher, he has been called upon by Hubbard to pitch on occasion, usually in pressure-packed situations.

He’s the guy who’ll come into a game with men on base, who Hubbard asks to get out of a jam, and he has done that job well.

When Rollins gets the call to pitch, he doesn’t have much time to make the transition.

He goes to the dugout, passes the equipment along to someone else, and heads to the mound.

Oftentimes he’s tired from squatting behind the plate, but he doesn’t let that impact him.

“You’re tired, but you just have to overlook it, and just go out there and play,” Rollins said. “I know that after the game is over, I’ve got plenty of time to rest, so I put everything I’ve got into it during a game.”

It helps that Rollins put so much effort into being as fit as he could be for his senior season.

Hubbard’s message to Rollins was that if he wanted to maximize his potential, he needed to make fitness a priority.

“We told him, if you ever want to be as good as you can possibly be, you’ve got to get in better shape,” Hubbard said.

Rollins, knowing how much would be asked of him this season, worked diligently in the offseason.

Last year’s team included four players, including all three primary pitchers, who would go on to sign college scholarships.

This team may not have that, but it has been finding ways to win games.

The Cavaliers head into today’s road game at Rockmart in second place in Region 5-AAA with a 4-2 record.