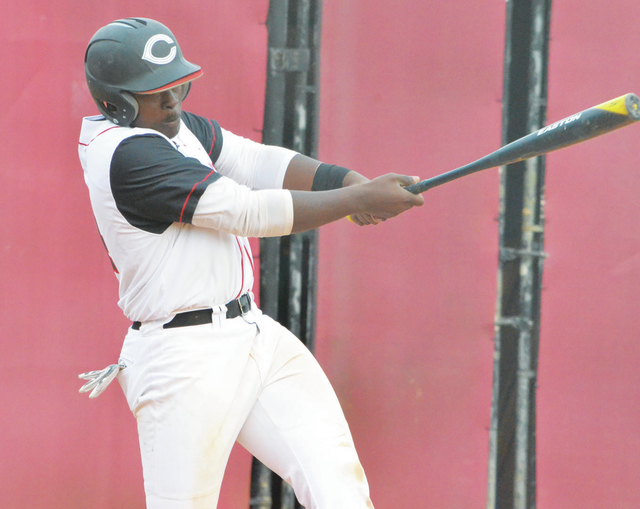 HOGANSVILLE – They had to settle for a split.

After winning the first half of Wednesday’s doubleheader against the Rockmart Yellow Jackets 12-7, the Callaway Cavaliers returned to the field about 30 minutes later looking for the sweep.

The Cavaliers came close, but it was the Yellow Jackets hanging on for a 3-2 victory to split the twinbill, and take two-of-three in the series.

Rockmart won the series opener 5-4 on Tuesday, and the teams met a day later for two games.

The doubleheader was supposed to be played on Friday, but the teams agreed to play on Wednesday instead because of the upcoming threat of rain.

Callaway had its chances to break through in Game 2, but Rockmart senior pitcher Tristian Wright made the pitches when he had two en route to the complete-game victory.

“They’re a good team,” Callaway head coach Dusty Hubbard said. “They play hard. They fight hard. Quite honestly, they made the plays when they needed to.”

In the first game, Dylan Johnson threw four shutout innings to get the win, and Callaway broke open what had been a one-run game by scoring five runs in the bottom of the fourth.

Rockmart got as close as four after that, but Callaway’s offense continued to put runs on the board.

“We did enough to win the game,” Hubbard said. “We did a great job of continuing to add on.”

In Wednesday’s final game, the Cavaliers were trailing 3-1 when Cortney Laye came through with an RBI single in the bottom of the sixth to make it a one-run game.

Callaway was still down by a run in the bottom of the seventh when Hunter Rollins reached on a two-out single, bringing Dylan Johnson to the plate.

Johnson made solid contact on a two-strike pitch and drove the ball up the middle, but it hit Wright’s foot, and he was able to make the throw to first for the final out.

“I think the ball Dylan hit was going to be through the middle, but who knows,” Hubbard said.

Slone Raper got the start for Callaway in the second game, and he threw well and pitched into the sixth inning before Rollins relieved him.

Rockmart took the lead with a run in the top of the first, and Callaway tied it in its half of the inning.

With two outs, Johnson walked and Noah Hammett was hit by a pitch, and Ty McCann followed with an RBI single to tie it at 1-1.

Rockmart scored single runs in the second and fourth innings to go up 3-1, and that’s the way it remained until the bottom of the sixth.

Johnson legged out an infield single to start the sixth inning, and two batters later, McCann ripped the ball to left field for his third hit of the game.

With two men on and one out, Laye’s base hit made it a one-run game, and the Cavaliers had a great chance to pull even or maybe even take the lead.

Rockmart’s pitcher was up to the challenge, though.

Wright got a strikeout and a groundout to end the threat, and Rockmart was clinging to a one-run lead.

In the bottom of the seventh, Rollins fought off a 3-2 pitch for a base hit, and Johnson made solid contact as well on a two-strike pitch, but it wasn’t meant to be.

In the first game, Callaway took a 1-0 lead in the bottom of the second.

Hammett reached on an error, and he later scored on a Ben Griffin base hit.

The Cavaliers batted around in the fourth inning and had five hits to plate five runs and build a 6-0 lead.

Hammett and McCann led off with back-to-back singles, and a sacrifice fly by Javoski Leverette drove in the inning’s first run.

Griffin reached on a bunt single to plate another run, and Raper stole home to make it a 4-0 game.

A base hit by Rollins brought in another run, and Johnson followed with an RBI single to give the Cavaliers a 6-0 lead.

After Rockmart scored two runs in the top of the fifth, Callaway answered with two runs of its own in the bottom of the inning.

Hammett walked, and he scored when the throw to third following a Raper base went awry.

Leverette followed with his second sacrifice fly of the game, and Callaway led 8-2.

Rockmart got within four once again with two runs in the top of the sixth, but Callaway responded with four runs in the bottom of the inning.

Devin Brock, Callaway’s leadoff hitter, singled and stole second, and Rollins brought him in with an RBI single.

Drake Wade made it to first with a bunt single, and after Hammett was hit by a pitch, McCann came to the plate with two men on.

McCann’s base hit plated two runs, and he ended up scoring on the same play because of an error, and Callaway led 12-4.

Rockmart managed three runs in the top of the seventh, but Callaway prevailed.

Callaway is off until Tuesday when it hosts Pepperell.