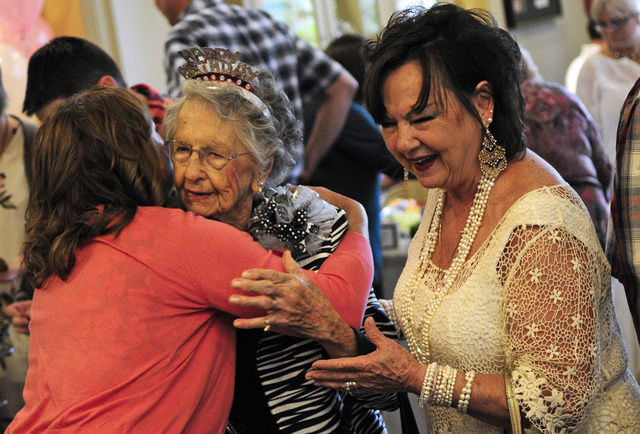 Annie Margaret Cupp has suffered heartbreak in her life, but it never tainted her outlook. Ask any of her family members, and they’ll say the centenarian has one of the biggest hearts of anyone alive.

Cupp celebrated her 100th birthday Saturday at Hills & Dales Estate — appropriate, as nephew Dough Myers of Kentucky noted, since the home is also celebrating its 100th year. The visitor center was packed with relatives who came to see who granddaughter Micki McCullough called the matriarch of a large family.

“Her opinion matters to everybody,” McCullough said of the woman she calls “Momma Cupp.” “She’s not in everybody’s business, but everybody will go seek her advice … She just has a big heart full of love. Because she’s so loving, all the in-laws look at her like their grandmother.”

Cupp’s life has come with challenges, though. When her son and daughter were 5 and 3 respectively, her husband died suddenly. She was left to raise her young children herself.

“Well, it was kind of rough in a way,” Cupp said nonchalantly about the circumstances, but then smiled. “But we had a good time.”

Cupp’s parents moved in with her on a 40-acre farm outside Hogansville to help her raise her children while she worked full time at a West Point Pepperell Co. mill.

“We’re just poor country people, but we had a good living,” Cupp said.

Cupp remarried, rekindling a relationship with her high school sweetheart, said her daughter, Charlene Bartlett of Griffin. They were married for 13 years before he was killed in a wreck, again leaving her a widow.

“She’s had a lot of heartache in her life, but she is always looking to do something for somebody else,” Bartlett said.

She would often host family dinners and provide a generous spread without asking guests to provide anything for the meal.

“She’s a very good cook, and she always made home-style meals for everyone. She’d have family dinners with six-meat entrees, all the vegetables, a whole spread that would cover the dining table,” McCullough recalled. “She did that for many years, until she was well into her 80s and couldn’t do it anymore.”

Cupp said her father, who raised vegetables into his 90s before passing away in the late 1980s, would often provide all the freshly picked vegetables and farm-raised meat for the meals.

Although Cupp has lived for 100 years, relatives said she’s still mentally sharp and self-sufficient, living alone in the same home she’s been in for more than 60 years.

Eight years ago, a tornado ripped the roof off the home and caused major damage while Cupp was in bed. Then 92, Cupp told the Daily News in a May 12, 2008, article that she sat in a chair and prayed in her bedroom – one area of the house where the ceiling suffered little damage — as the thunder, lightning and rain continued.

She changed into dry clothes and walked out of her bedroom to find the ceiling in the rest of the home was gone. Her son, Mack Kitchens, who lives next door and other relatives came to help her salvage items. They noted the meticulous home-keeper fixed her bed before others arrived.

Cupp was thankful that her beloved 18-year-old cat, Gracie, survived the night with her. When the feline later died at 19 years old, it was a big loss, McCullough said.

The granddaughter added that Cupp did wonder after the storm why God chose to spare her, and decided it was so she could live to see her extended family.

“I’m just grateful that the lord let me live to raise my two children,” Cupp said. “… So he did, and I’m still here for a purpose.”