Troup halfway to a championship 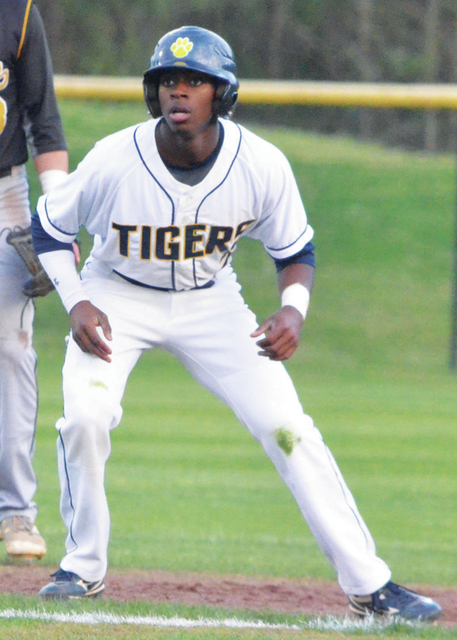 Troup’s Miles Cameron had six combined hits in Wednesday’s two tournament games, and he had a triple and a home run in the opener against Windermere Prep. Kevin Eckleberry | Daily News

http://lagrangenews.com/wp-content/uploads/sites/37/2016/03/web1_troup-cameron-1.jpgTroup’s Miles Cameron had six combined hits in Wednesday’s two tournament games, and he had a triple and a home run in the opener against Windermere Prep. Kevin Eckleberry | Daily News

In an 8-5 win over Bishop McLaughlin, Troup’s Jarred Helton was the winning pitcher, and he also had three hits. Kevin Eckleberry | Daily News

http://lagrangenews.com/wp-content/uploads/sites/37/2016/03/web1_troup-helton.jpgIn an 8-5 win over Bishop McLaughlin, Troup’s Jarred Helton was the winning pitcher, and he also had three hits. Kevin Eckleberry | Daily News

Troup’s Ryan Bliss had a two-run home run in the win over Windermere Prep, and a hit and two RBIs against Bishop McLaughlin. Kevin Eckleberry | Daily News

http://lagrangenews.com/wp-content/uploads/sites/37/2016/03/web1_troup-bliss2.jpgTroup’s Ryan Bliss had a two-run home run in the win over Windermere Prep, and a hit and two RBIs against Bishop McLaughlin. Kevin Eckleberry | Daily News

BRADENTON, Fla. – All the scouts were there to see Austin Bergner, the hard-throwing pitcher for Windermere Prep (Fla.) who will most likely be a first-round pick in the June draft.

On Wednesday morning, Bergner was the starting pitcher for Windermere Prep (Fla.) against the Troup Tigers in the opening round of the IMG National Classic.

“There are scouts everywhere,” Troup head coach Craig Garner said. “They’re all there to see that kid.”

The day belonged to the Tigers, though, who had no trouble with Bergner or the rest of his team.

Payton Upchurch pitched a complete-game gem, and Miles Cameron and Ryan Bliss both hit home runs as the the Tigers cruised to a 6-1 victory.

After that game, the teams were seeded and bracket play began, and second-seeded Troup beat seventh-seeded Bishop McLaughlin (Fla.) 8-5 to improve to 2-0 in the tournament.

Troup will take on St. Johns College at 4 p.m. today, and if it wins that game, it will play for the championship on Friday.

In Wednesday’s opening game, Troup had five hits and one run against Bergner, who left after three innings.

Bergner’s replacement, Noah Mitchem, was touched up for five runs on five hits, and he gave up back-to-back home runs to Bliss and Cameron in the sixth inning.

Garner told his players to embrace the challenge of facing an elite pitcher like Bergner, and they responded.

“That’s what I told them. You take full advantage of that,” Garner said. “Don’t be afraid of failure. Go up there and show what you can do.”

Cameron had two of Troup’s hits against Bergner, including a triple.

“We battled against him,” Garner said. “I was very pleased.”

The best pitcher in the game was the left-handed Upchurch, who scattered six hits and gave up just one unearned run in the first inning.

No one on the Windermere Prep team had more than one hit against Upchurch.

Cameron, who had six hits in the two games combined, was 3-for-4 against Windermere Prep with a triple and a home run.

Bliss had two hits, including a two-run home run in the sixth inning, and leadoff hitter Bo Halcomb had two hits and two RBIs.

Colby Bridwell also had two hits, Colby Williams had a hit and an RBI, and Jarred Helton had a double.

Trailing 1-0, Troup scored a run in the bottom of the third to pull even, and it claimed the lead with a pair of runs in the fourth inning.

It remained a 3-1 game until Troup broke it open with three runs in the sixth inning.

Bliss knocked the ball out of the park for a two-run home run, and Cameron followed with a solo homer to cap the scoring.

In the win over Bishop McLaughlin, Cameron had the hot bat again, going 3-for-4 with two RBIs, and Jarred Helton had three hits with a double and an RBI, and he was also the winning pitcher.

Halcomb had two hits and two runs scored, Bliss had a hit and two RBIs, and Bridwell and Cooper Doughman each had a hit and an RBI.

Kinley Bridwell added two hits, and Williams and Trent Bailey both had hits as well.

Everyone in the Troup lineup was on base

Helton got the start, and he pitched 6 2/3 innings to get the win, and after he ran into trouble, Williams entered the game and got the final out.

The game was tied 1-1 when Troup surged ahead with four runs in the bottom of the third inning.

Bishop McLaughlin got within one with three runs in the top of the fifth, and Troup answered with a run in the bottom of the inning and two more in the sixth to go up 8-4.

Bishop McLaughlin added a final run in the seventh inning.

It was an impressive performance by the Tigers, especially considering they’re short-handed, with four starters unable to play for various reasons.

In the second game, four of Troup’s starters were either freshmen or sophomores.

“We had Trent Bailey behind the plate,” Garner said. “We had Colby Williams at third, and Cooper Doughman (as desginated hitter). And we had Kinley Bridwell in left, and we had Ryan Bliss at short.”

Troup will try to keep it going today when it faces sixth-seeded St. Johns College, which beat Regis Jesuit 10-2 in bracket play to reach the final four.

St. Johns lost its first game on Wednesday before bouncing back to beat Regis Jesuit, which was seeded third.

OF NOTE: To watch a live stream of today’s game, go to imgnationalclassic.com