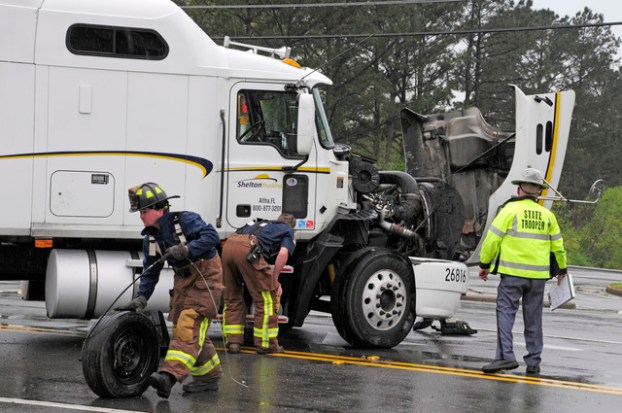 A white Ford Fusion sedan, Mack truck and green Dodge Caravan sit on New Franklin Road at North Davis Road on Thursday after a wreck that injured one person.

Firefighters roll a wheel away from a wrecked Mack truck on New Franklin Road on Thursday.

http://lagrangenews.com/wp-content/uploads/sites/37/2016/04/web1_web0401Wreck2-3.jpgFirefighters roll a wheel away from a wrecked Mack truck on New Franklin Road on Thursday.

LaGRANGE — One person was injured in a wreck Thursday involving an 18-wheeler, minivan and sedan that snarled traffic at New Franklin and North Davis roads.

The wreck, reported at 1:37 p.m., involved a 2005 Mack truck registered from Florida colliding with a 2006 Ford Fusion and 1995 Dodge Caravan at the intersection, according to preliminary information available from Georgia State Patrol.

The drivers of the Fusion and tractor-trailer said the driver of the Caravan was eastbound on North Davis Road and ran the red light at New Franklin Road, said the trooper who investigated the wreck. The truck and sedan then collided with the van.

The drivers were the only occupants of the tractor-trailer and minivan, and there were two occupants in the Fusion, according to the unfinished GSP report. The driver of the Fusion was taken to WellStar West Georgia Medical Center, where she was treated and released, according to a hospital official.

The tractor-trailer was hauling copper plates, some of which fell from the bed of the truck onto the road. Troup County sheriff’s deputies directed traffic on the road for more than an hour as officials investigated and cleaned up the wreck.