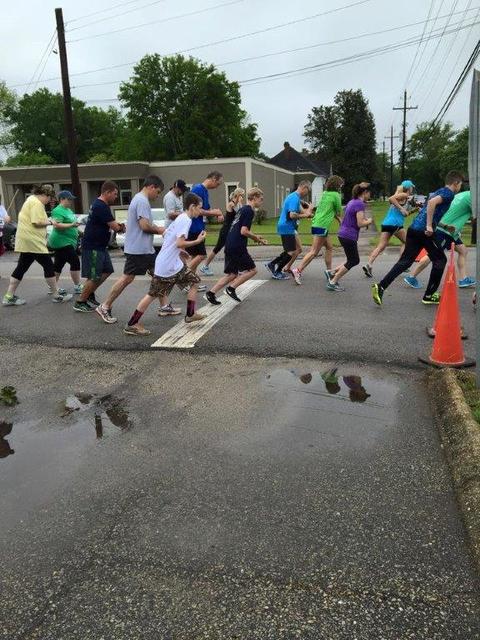 Runners and walkers braved some damp conditions last year at the inaugural Blazing Road Run hosted by the West Point Fire Department. This year, the firefighters hope for better weather and a bigger turnout for the event, which is set for April 16 at the West Point First Baptist Church, 301 E. 8th St.

http://lagrangenews.com/wp-content/uploads/sites/37/2016/04/web1_2015-Road-Run.jpgRunners and walkers braved some damp conditions last year at the inaugural Blazing Road Run hosted by the West Point Fire Department. This year, the firefighters hope for better weather and a bigger turnout for the event, which is set for April 16 at the West Point First Baptist Church, 301 E. 8th St.

WEST POINT — Firefighters with the West Point Fire Department are trading in their boots for running shoes this month in hopes of helping burn victims around Georgia.

The department is hosting its second annual Blazing Road Run on April 16, which features a mile, 5K and 10.5K race — or walk — through some of the sprawling neighborhoods near West Point First Baptist Church.

“The community gets to see who we are and come out and meet us,” said West Point Firefighter Didar Suleman. “Last year, some of the firefighters’ wives came and helped us set up the race area. People came out and talked with us and learned more about what we do … it was a good community event for us, but we didn’t get anything monetarily from it.”

All the proceeds from the Blazing Road Run benefit the Georgia Firefighter’s Burn Foundation. The organization helps offset medical costs for burn victims, provides educational materials, training and prevention information, and sends young burn victims to a special camp every year, among other initiatives.

“You never know when something like that (fire) might happen to you or to me,” said fire Lt. Roderick Palmer. “Any amount of change will help. If you want to donate a dime, then donate a dime.”

Palmer is one of the organizers and founders of the Blazing Road Run.

“We used to do the annual boot drive to raise money for the Georgia Firefighter Burn Foundation. Then we decided we wanted to do it another way,” he explained. “So we came up with the run, and the first time we held the Blazing Road Run last year, we raised more money for the Burn Foundation than we ever did for the boot drive.”

The West Point Fire Department raised $2,700 from the race — the highest total among all the fire departments in Troup County, according to West Point Fire Chief Milton Smith.

The firefighters want to exceed that total this year and have more people blaze a trail of hope and support for burn victims throughout the state of Georgia.

The Blazing Road Run is set for April 16 in front of the West Point First Baptist Church at 301 E. 8th St.

All runners and walkers will receive a free T-shirt and refreshments. West Point firefighters said if people would like to make a donation and not participate in the run, they will also get a T-shirt.

The fire department is also looking for more corporate sponsors.

Anyone who wants to donate or sponsor the event, learn more information or sign up for the West Point Fire Department’s Blazing Road Run can contact Lt. Roderick Palmer at 706-645-3508 or rpalmer@cityofwestpointga.com. The information is also on the department’s newly launched Facebook page at www.facebook.com/westpointfiredepartment.