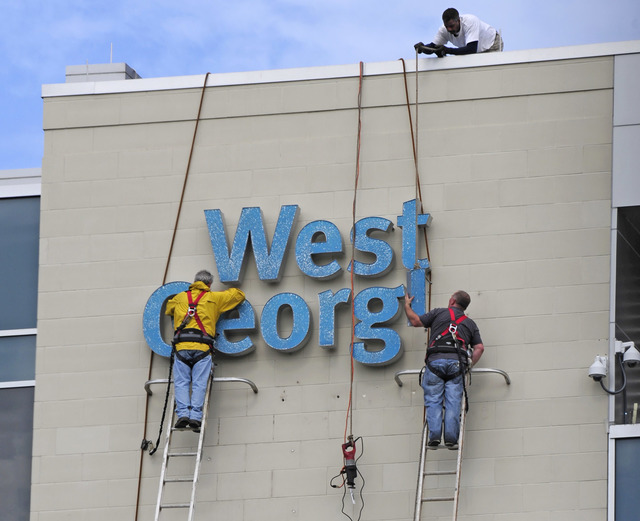 http://lagrangenews.com/wp-content/uploads/sites/37/2016/04/web1_web0401WGHSign-2.jpgWorkers with Marietta-based company 41 South Creative take down the letters of the West Georgia Health sign on Thursday from the South Tower of West Georgia Medical Center, which is officially renamed WellStar West Georgia Medical Center starting today. The local health system merged with Marrietta-based WellStar Health System in a deal estimated to provide $40 million in community benefit, according to independent auditors.

Now named WellStar West Georgia Medical Center, the hospital will remain a nonprofit provider and be one of 11 inpatient hospitals operated by WellStar in Georgia.

“We are writing history with the newly named WellStar West Georgia Medical Center,” said Jerry Fulks, president of WellStar West Georgia Medical Center. “We are fortunate to join a system of like-minded individuals who are actively working to improve the health and well-being of their patients and community. With WellStar, we are better positioned to care for our patients today and in the future.”

With its acquisition of West Georgia Medical Center and five other Tenet Healthcare hospitals on Friday, WellStar’s network of 11 hospitals makes it the largest health care provider in Georgia and one of the largest in the country. WellStar’s president and CEO, Candice Saunders, said the larger system will allow for better patient services.

“As WellStar continues on the journey to deliver world-class health care, our physicians, nurses and team members put the patient and family first,” she said in a statement. “With an expanded footprint, we will leverage best practices to make a difference in the health of our communities by delivering the right care, at the right time, in the right place.”

It’s unlikely that patients will notice many immediate changes, Fulks has said previously. However, WellStar has pledged $84 million in capital investments at the hospital’s campus over the next seven years, $30 million of which would be spent in the first two years to renovate the Enoch Callaway Cancer Clinic. Down the line, less visible but equally important investments such as conversions of payroll and electronic medical records software would be made, officials have said.

The brick-and-mortal hospital will continue to be owned by the LaGrange-Troup County Hospital Authority, but now leases it to WellStar Health System, instead of West Georgia Health — a brand no longer being used following the WellStar acquisition.

WellStar West Georgia Medical Center is Troup County’s third-largest employer and provides about 1,400 jobs. Saunders has previously promised her organization would work to be an “employer of choice,” and that “our people are our greatest asset.” Under previous negotiations, WellStar has pledge not to lay off any employees for the first six months. Beyond that, the health system would evaluate future needs and make adjustments as it deems necessary.

With approximately 20,000 employees system-wide, WellStar has received numerous accolades for work-life balance, including being named to Fortune magazine’s 100 Best Companies to Work For list for the past three years.

“At WellStar, we are creating an atmosphere that fosters healing and wellness,” said Gary Miller, chair of WellStar Board of Trustees. “We are changing the way we care for our communities with cutting edge treatments and new initiatives that keep people healthy. Together, we are better positioned to provide world-class healthcare to our patients for years to come in LaGrange, Troup County and beyond.”

As a nonprofit, WellStar reinvests in the health of the communities it serves with new technologies and treatments.