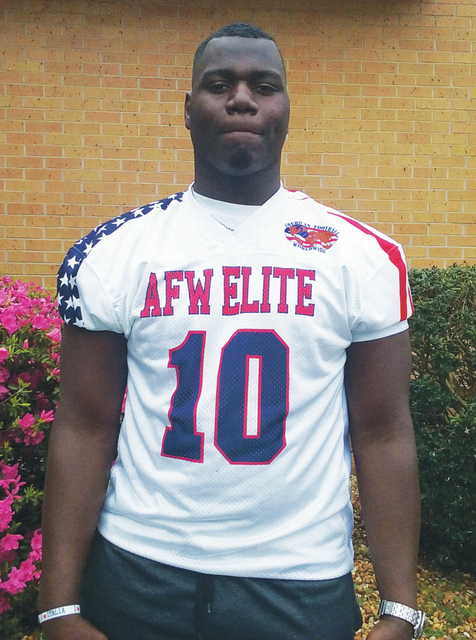 LAGRANGE – He got to represent Lafayette Christian School on the football field one final time, and he made it count.

Eli Shepherd, who helped lead the Cougars to a state championship last fall, was one of dozens of players from across the country who was selected to be a part of the American Football Worldwide USA Elite 19-and-under Elite football team.

The USA team was in Italy last week to play an all-star team composed of Italian players.

The game didn’t offer much drama, with the American team winning 68-3, and Shepherd dominated from his linebacker position.

“It was over with in the first quarter,” Shepherd said.

While Shepherd said he and his teammates took the game seriously and wanted to play well, he said there were no hard feelings.

“It was basically like a friendship game,” he said. “We fellowshipped with them throughout the week. We all became friends during that game. We all pretty much knew each other.”

Shepherd did emphasize that when it was time to play, “it was all about business.”

The highlight of the game for Shepherd came when he broke into the backfield and made a tackle for a loss, and he enjoyed the moment with a quick celebration.

“I made a big tackle for a loss. I had to celebrate,” he said. “It was like my last high-school game.”

Shepherd is coming off a phenomenal senior season, and he was an impact player as a linebacker, and running back.

When the season ended, Shepherd played in the All American Bowl in Daytona Beach, Fla. on Jan. 1, and he excelled there.

Shepherd made enough of an impression to earn an intivation to be a part of the AFW all-star team, and he jumped at that opportunity.

Shepherd and his teammates flew from New York to Italy, and they spent more than a week there, leading up to Saturday’s game.

“We got up every morning around 6, and practiced for two hours, did a lot of drills, that kind of thing,” Shepherd said. “We had a lot of team time, linebackers in this group, defensive players in this group, and then we’ll come together as a team and go against the offense. We never did full pads, though. It was a lot of learning. Pretty much knew that we were more experienced than the Italian team. He just wanted to build chemistry.”

It wasn’t just about football.

During the nine days Shepherd and his teammates were in Italy, they spent a lot of time touring the country, visiting many of the cities in Italy, while taking in some of the country’s most famous landmarks including the Roman Colosseum.

While Shepherd didn’t know any of the other members of the team before the trip began, he said it wasn’t long before they were acting like old friends.

The next time Shepherd puts on a football uniform, he’ll be a member of the University of Tennessee at Chattanooga team.

A few weeks ago, Shepherd signed his letter of intent to play at UTC, and he’ll soon become the first Lafayette Christian graduate to play college football.

Shepherd is grateful that he was able to win a state championship before he left Lafayette Christian.

There were a few shaky moments during the season, particularly during a three-game losing streak that left the Cougars on the brink of missing the playoffs, but they caught fire and won the Georgia Independent Christian Athletic Association state title.

“We all came together as a team, all the seniors basically, and we bonded more, got our chemistry together, and won a championship,” Shepherd said.