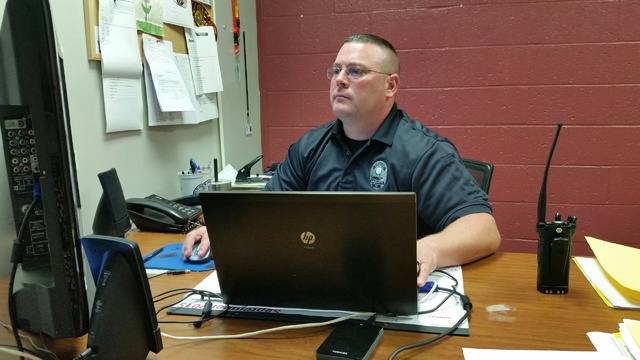 Sgt. Mark Cavender is the head of LPD’s Special Investigation Unit. He said Georgia’s gang statute can add years on to a convicted gang members sentence if they are given the maximum amount of time.

http://lagrangenews.com/wp-content/uploads/sites/37/2016/04/web1_20150902_152733.jpegSgt. Mark Cavender is the head of LPD’s Special Investigation Unit. He said Georgia’s gang statute can add years on to a convicted gang members sentence if they are given the maximum amount of time.

Reporters Note: This is part 2 in a two-part series on how local law enforcement and the District Attorney’s office is using Georgia’s violation of street gang terrorism and prevention act to their benefit. The agencies are working together in an attempt to eradicate the gang crisis in our community. For law enforcement officers, this means arresting gang members and their associates.

LaGRANGE — When Raphael Darquez Dyer, 25, was detained Tuesday afternoon in the parking lot of Fuller’s Superette at 900 Hamilton Road, investigators with LaGrange Police Department’s Special Investigation Unit said they knew right away he was a member of the Bloods criminal street gang.

SIU investigators said Dyer had been charged four other times for driving offenses while behind the wheel of a 1999 green Honda Accord, which belonged to his girlfriend, Shantavis Denise Dozier, 23. It was the same car he driving on Tuesday when he was stopped by LaGrange police.

Sgt. Mark Cavender, head of SIU, said police had issued Dozier a written warning on April 29, 2015, for allowing Dyer to drive her vehicle while unlicensed.

On Tuesday, investigators did not issue the 23 year old a warning, instead they arrested her on two counts of violating the street gang terrorism and prevention act and participation of criminal street gang activity in relation to Dyer’s actions as a known gang member while driving her car.

Though Dozier herself may not be a member of a gang, in the state of Georgia she still could be breaking the law.

The impact of the gang statute may have more power and strength than the gangs themselves, according to Coweta Judicial Circuit District Attorney Pete Skandalakis. Although, for many people it may not seem that way right now.

“ … I realize criminal street gang activity negatively impacts our neighborhoods, schools and business community,” Skandalakis wrote the Daily News via email. “It is a quality of life issue for our citizens and, therefore, I am devoting the resources I do have in my office to prosecuting these cases. Each case will be evaluated on a case-by-case basis, and we will do our best to curtail gang related crimes by prosecuting those involved. … Obviously, the DA’s office and law enforcement cannot do this alone. We are hopeful community leaders will assist us in taking on these crimes and tackling the issues which lead young people to become involved in gangs.”

“The District Attorney’s office and the LaGrange Police Department realized years ago we needed to read over the gang statute and take advantage of all it has to offer,” he stated. “Communities have seen a significant increase in gang activity … and of kids being raised by the streets.”

Perhaps no one has seen more of that activity than Investigator Ray Ham and Sgt. Mark Cavender.

“The whole purpose of the gang statute is to eradicate gangs and their ‘fear tactics,’” explained Cavender. “Gangs are a form of domestic terrorism on our soil … and that is where they get their power from. They know how to put an entire street and neighborhood on lockdown just on fear alone … so if we arrest these guys (gang members), convict these guys and sentence these guys; then we can get them off the street.”

Cavender is the head of LPD’s Special Investigation Unit and Ham is a gang analyst within the team. Both are considered experts in their fields and have been called on numerous times by the Troup County District Attorney’s Office to testify in trials, especially when they include known gang members or their associates.

Ham was one of the first expert witnesses on the stand last week in the Troup County Superior Court trial against Rashaad Quantez Garrett, 22.

Garrett was charged with two counts of robbery, aggravated assault, armed robbery, violation of the street gang terrorism and prevention act, criminal attempt to commit a burglary, burglary and robbery by intimidation. All the charges stemmed from crimes that happened in 2014.

He was found guilty on three of those charges, including violating the Georgia gang statute. Ham’s testimony included messages and photos from Garrett’s Facebook page that showed him throwing signs, writing in code and slang, wearing colors, plus bragging about crimes to increase his status within the Bloods criminal street gang.

Garrett was sentenced by Superior Court Judge Emory Palmer to 55 years behind bars, 15 of those in a state penitentiary for violating the gang statute.

Added Cavender: “ … We hope that the sentence last week with Rashaad Garrett will show the community that we will work on these problems and with their cooperation these are the type of convictions and and sentences we’ll get.”