Car crashes through store window on Lafayette Parkway in LaGrange 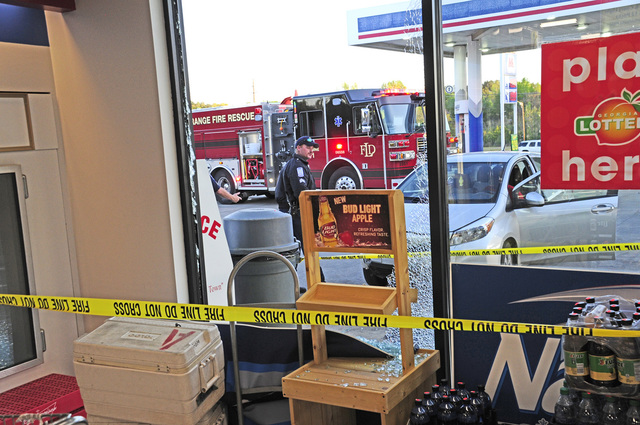 LaGrange fire Sgt. Mike Cosmah speaks with the driver of a vehicle (not shown) that crashed into a window at the Marathon convenience store at 1740 Lafayette Parkway about 7:30 a.m. Tuesday. No one was injured.

http://lagrangenews.com/wp-content/uploads/sites/37/2016/04/web1_web0405CarThruStoreWindow01.jpgLaGrange fire Sgt. Mike Cosmah speaks with the driver of a vehicle (not shown) that crashed into a window at the Marathon convenience store at 1740 Lafayette Parkway about 7:30 a.m. Tuesday. No one was injured.

http://lagrangenews.com/wp-content/uploads/sites/37/2016/04/web1_web0405CarThruStoreWindow02.jpgA view from inside the Marathon convenience store at 1740 Lafayette Parkway shows damage caused when a Toyota Yaris accidentally accelerated into a convenience store window about 7:30 a.m. Tuesday.

LaGRANGE — A man apparently drove a car through the front window of the Marathon convenience store at 1740 Lafayette Parkway about 7:30 a.m. Tuesday.

Store manager Davett Monroe said she heard the glass shatter, initially thinking it was the ice machine outside that area of the store. She then saw glass dropping from the top of the shattered window pane and walked over to the area to see what happened.

“The guy drove in through the glass,” she told the Daily News as she stood behind the store counter this morning. She was surprised and “just kind of shocked. … When I walked over, he was in here and then backed it out the window.”

Monroe didn’t have an estimate on how much damage the car caused. The window pane and a small display appeared to be the only damaged property in the store. The sedan, a Toyota Yaris, sustained front-end damage.

LaGrange firefighters and police responded to the call and enclosed the shattered window with police tape.

“Nobody’s hurt, nobody’s injured,” said LaGrange Sgt. Mike Cosmah at the scene. “We’re just going to make sure nobody gets in the way, gets hurt.”

Cosmah and a LaGrange police officer making a report of the incident this morning said the driver accidentally hit the accelerator instead of the brake, driving through the window. The driver declined to speak with the Daily News.

The reporting officer said at the scene that he would determine whether the driver may be cited in the incident.