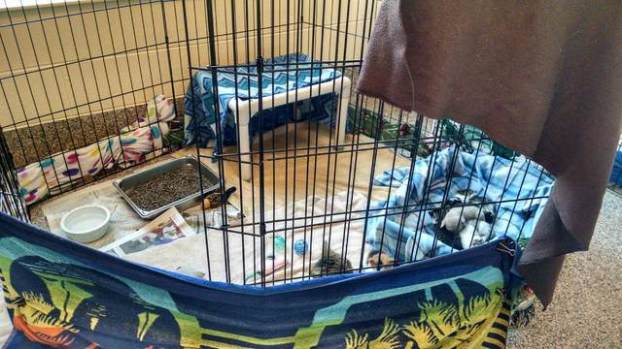 Orphaned puppies on way to adoption in Michigan

Cats, puppies and kittens from the LaGrange Animal Shelter rest at a foster home in Westland, Mich., last week after being taken there by the nonprofit Puppy Pipeline Rescue of Georgia.

http://lagrangenews.com/wp-content/uploads/sites/37/2016/04/web1_PuppiesFolo01WEB.jpgCats, puppies and kittens from the LaGrange Animal Shelter rest at a foster home in Westland, Mich., last week after being taken there by the nonprofit Puppy Pipeline Rescue of Georgia.

LaGRANGE — Orphaned puppies who found foster moms in two cats at the LaGrange Animal Shelter last month are on their way to being adopted from a shelter in Michigan.

The two pups’ mother was hit and killed by a car on Thornton Street in mid-March, and they wound up at the city’s shelter. Two nursing cats who just had given birth took the dogs in and reared them, the city shelter’s supervisor, Chris Bussey, said previously.

On Friday, Puppy Pipeline Rescue of Georgia, an animal rescue nonprofit, took the pups — along with the two nursing cats and their litters — to the Michigan Humane Society’s Berman Center for Animal Care in Westland, Michigan, according to Mike Doughtery, the nonprofit’s founder.

“They’re a real big operation, a first-class shelter,” Doughtery said. “What they’re going to do is take them and foster them for a little while, and then place them up for adoption. I think with the cats and the dogs and the kitties, they should go within a week.”

Puppy Pipeline works with overcrowded animal shelters in the South and transports the animals primarily to the Northeast, where there’s a deficit of animals up for adoption, Doughtery said.

Ryan McTigue, a spokesman for the Michigan Humane Society, said both puppies, the nursing cats and the kittens are all at the same home in Michigan now, being fostered until they’re old enough to be adopted.

“They’re doing great,” McTigue said by phone. “They stayed with the shelter for about a day or two, then we got them into a foster home where they can relax.”

McTigue said the partnership between LaGrange Animal Shelter, Puppy Pipeline and the Michigan Humane Society was “a great thing.”

“It takes a village,” he continued. “It’s bigger than any one organization can handle, and collaboration is key throughout the country. The issues facing animals in our community are pretty great — great in a sad way sometimes, but it’s the collaboration that helps positive outcomes like this happen.”

Since its beginning in 2007, Puppy Pipeline has worked with “no-kill” shelters to place more than 3,800 dogs into homes across the United States.