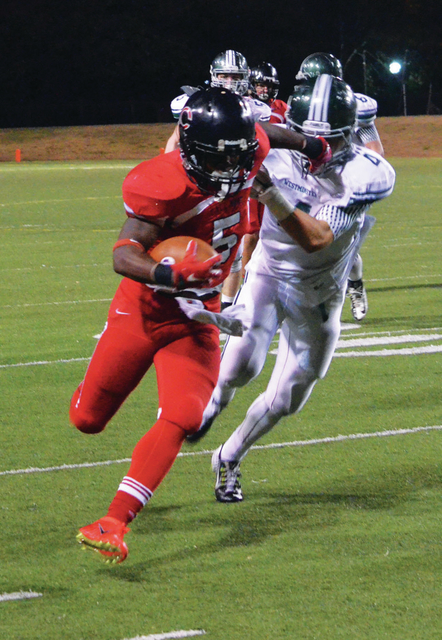 HOGANSVILLE – They had their chances.

After falling behind by six runs in Tuesday’s home game against the Pepperell Dragons, the Cavaliers had the go-ahead run on base in the sixth inning, and they had the tying run at the plate in the seventh inning.

The Cavaliers were unable to pull off the comeback, though, and it was the Dragons coming away with the 7-3 Region 5-AAA win.

With the results of Tuesday’s games, there is now a three-way tie for second place in the region, with Callaway, Pepperell and Rockmart all deadlocked at 5-5, and Central-Carroll is a game back at 4-6.

Only three of those four teams will qualify for the state playoffs, making each game at this point critically important.

Callaway will visit Pepperell on Friday for a doubleheader at 3:15 p.m., and it will complete its region schedule with three games against Cedartown next week.

Cedartown, which blanked Haralson County 10-0 on Tuesday, is running away with the region’s top spot with a 9-1 record.

In Tuesday’s game, Callaway was hurt by some shaky defense that led to six unearned runs.

“We just got ourselves down too much,” Callaway head coach Dusty Hubbard said. “I was proud of the way we came back and put the tying run on in both innings. We gave ourselves a chance. But defensively the way we played, you’re just not going to win. You’ve got to make plays, and we didn’t do that.”

Pepperell, taking advantage of three Callaway errors, scored four runs in the top of the fifth inning to take a 6-1 lead.

The Cavaliers pushed two runs across in the bottom of the sixth inning to get within three, and they had the bases loaded when the third out was recorded.

Pepperell scored a run on a passed ball in the top of the seventh inning to go up 7-3.

Callaway loaded the bases and had the tying run at the plate in the bottom of the inning, but Pepperell pitcher Zach Williams got a groundout to end the threat, and the game.

Callaway swung the bat and had nine hits, and numerous other balls were hit hard, only to go right to a Pepperell fielder.

“We hit some balls right on the nose and they went right at people,” Hubbard said. “That’s just the way it goes.”

Callaway struck first, scoring a run in the bottom of the first inning to take a 1-0 lead.

Dylan Johnson led off with a single, and Cortney Laye later came through with an RBI single to bring in courtesy runner Dre Martin.

The Dragons got their leadoff man on in the inning, but the Cavaliers turned a double play, with second baseman Jordan Bonner fielding the ball, stepping on second for the first out before whipping a throw to first for the second out.

The Dragons put together a two-out rally, though, and Wesley Wade’s RBI single gave his team a 2-1 lead.

Pepperell busted it open with four runs in the fifth inning.

A double by Williams sandwiched around two errors loaded the bases with no outs, but it looked like Johnson might get out of the inning with no runs scoring when he got a fielder’s choice and a strikeout.

Connor Chandler’s bloop single into right field drove in two runs, though, and when a throw to third bases got away, a third run ended up scoring as well.

Chandler never slowed, and he also scored on the play, giving the Dragons a 6-1 lead.

The Cavaliers were still down by five when they put something together in their half of the sixth inning.

Johnson reached on an error leading off, and with one out, Ty McCann and Laye had back-to-back singles to load the bases.

Devin Brock’s sacrifice fly brought a run in to make it 6-2, and after Noah Hammett walked to load the bases again, Slone Raper was hit by a pitch, and it was a three-run game.

Williams got a groundout for the third out, and Pepperell maintained a 6-3 lead.

After the Dragons scored a run in the top of the seventh, the Cavaliers came to the plate knowing they needed to score four runs to tie it.

With one out, Johnson doubled, and Hunter Rollins reached on a single to put runners on first and third.

Two batters later, Laye reached on a two-out walk, and the bases were full, with the tying run at the plate.

Williams was once again up to the challenge, and a groundout to the first baseman ended the suspense.

Johnson and Laye both had two hits for Callaway, and Hammett, Ben Griffin, Rollins and McCann also had hits.