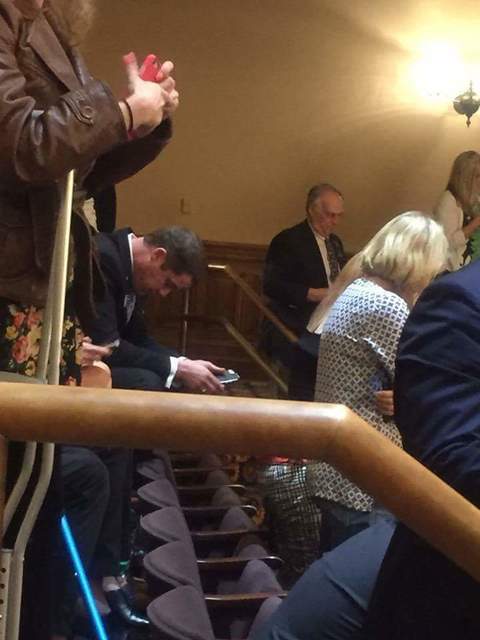 Dale Jackson slumps in his chair at the end of the 2016 Georgia Legislative session after he reluctantly advised the state Senate committee to vote ‘no’ on SB145, which would have allowed his son Colin and others with autism to legally use cannabis oil.

http://lagrangenews.com/wp-content/uploads/sites/37/2016/04/web1_received_10206321148284411.jpegDale Jackson slumps in his chair at the end of the 2016 Georgia Legislative session after he reluctantly advised the state Senate committee to vote ‘no’ on SB145, which would have allowed his son Colin and others with autism to legally use cannabis oil.

Reporter’s Note: Second in a two-part series. For the second year in a row, local father Dale Jackson fought alongside dozens of parents and politicians to add more disorders to the state medical marijuana registry. It would allow hundreds of people, like his 7-year-old son, Colin, who suffers from autism, legal access to cannabis oil. But on the last day of the 2016 legislature, with 30 seconds left to decide, Jackson ultimately asked state senators to vote down the bill.

LaGRANGE — It was not the big moment Dale Jackson had hoped and prayed for as the clock struck midnight on March 24, signaling the end of the day and the 2016 Georgia legislative session.

As state politicians hooted and hollered with happiness from the floor and threw paper confetti in the air, Jackson slumped in his seat in the gallery above with his head in his hands.

He had just advised a group of senators to vote “no” on Senate Bill 145, and in the process made his son and many others collateral damage.

Earlier in the evening of March 24, Jackson said he and other parents learned autism and another disorder called epidermolysis bullosa, would be added to SB145. But in doing so, senators wanted to go back and change HB1, passed in 2015, and reduce the THC levels in cannabis oil from 5 percent to 3 percent.

“That’s when all the parents decided that touching HB1 in any way was unacceptable,” said Jackson. “So we waited.”

The clock continued to tick down to midnight.

Just as parents were about to lose hope, Jackson said he caught a glimpse of a bill being circulated on the floor. From his vantage point in the gallery, he saw familiar faces become upset and concerned.

That is when a group of senators motioned for him to come down to the floor, Jackson said.

“I ran down there … and Senator Mike Dugan (R—District 30) said, ‘I know you’re not willing to accept a cap of 3 percent, but the bill does include autism. We’ll do what you all want us to do,’” Jackson said, recalling what happened that night. “That’s when the magnitude of the decision hit me. I faced sending parents and children back to Colorado or having a bill that included my son.

“Then Dugan said, ’You’ve got 30 seconds to decide.’ I’ll never forget those words. I walked away for 10 seconds, bent over in pain … then, crying my eyes out, I went back to him and told him the only words I could get out, ‘Vote no.’”

Jackson said with those two words, he and the rest of the families watched as their hopes for their children and countless others ticked away with just 20 seconds left on the clock.

The family was dealt another blow when they learned the bill containing an ordinance to close the 1980 language loophole that allowed them to legally obtain cannabis oil more than 5 percent and under 14.9 percent THC had been voted into law earlier in the night.

“At that moment in time, when I made that decision to not move forward with SB145, I honestly did not know what we were going to do for Colin,” Jackson said. “My wife and I had not had that discussion. But the advancements we have seen in Colin are numerous … there’s not a government official or agency in this state that could pry that cannabis oil out of my hands.”

While the decision to nix the bill this legislative session was painful, Jackson stated he has no regrets over his choice that night.

“The approach we (Hope United) have taken for the past two years is not to do what was politically expedient, but what was best for the families in the long term,” he explained. “We could not allow the legislators to touch anything the families had already worked so hard to put into law (HB1). It was bad enough that families had to uproot themselves, move to Colorado and then back to Georgia. I couldn’t see putting those same families in limbo again.”

Jackson said he, some of the families and some state politicians are already rallying together to plan for a new and improved medical marijuana bill to present for the 2017 legislative session.

They are also figuring out ways to help the families who may be on the medical marijuana registry list but still have no legal way to obtain the cannabis oil in Georgia.

While it is legal to have medicinal marijuana in Georgia for those on the state registry, it is still against state and federal law to bring illegal drugs across state lines.

There is also no other state in the country where a Georgia resident can purchase cannabis oil for their child because every state has resident clauses, Jackson said.

That loophole is placing hundreds of people in precarious situations, he added.

“… Parents are making it (cannabis oil) in their kitchen and don’t know what strength they are making it at, or they don’t know what they’re making,” Jackson said. “We have parents that are still left with a desire to help their child and power to be able to do it, and no tools to do it. … This includes parents whose children are on the medical marijuana registry list. They still have no legal way to obtain it. They may have to buy it on the streets and have no way of knowing if it is free of impurities or what power it is.”

Jackson said he and his friend Vince Seivert are committed to helping families find safe, lab-tested cannabis oil and share pertinent knowledge about the medicine and dosage information.