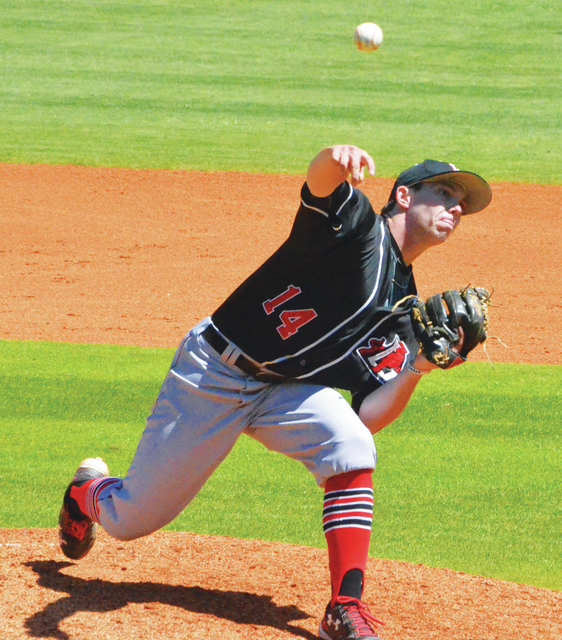 Cain Sauls had the game-winning hit in the first game of Tuesday’s doubleheader against Millsaps. Kevin Eckleberry | Daily News

http://lagrangenews.com/wp-content/uploads/sites/37/2016/04/web1_LC3-1.jpgCain Sauls had the game-winning hit in the first game of Tuesday’s doubleheader against Millsaps. Kevin Eckleberry | Daily News

LAGRANGE – The wins just keep on coming for the LaGrange College baseball team.

The Panthers swept a doubleheader from the Millsaps Majors on Tuesday, giving them a 12-game winning streak, and they’ve won 15 of 16 games overall.

The Panthers won the opening game in walkoff fashion, with Keith Sims driving in the winning run in the bottom of the eighth inning to lift his team to a 5-4 victory.

There was no suspense in the second game, with LaGrange College exploding for seven runs in the first inning on the way to a 10-2 win.

The Panthers (25-10) will wrap up their USA South schedule with a three-game series against the Maryville Scots beginning on Friday.

In Tuesday’s first game, the Panthers were down 4-2 when they scored two runs in the bottom of the sixth to tie it, and they won it with a run in the eighth inning.

With one out, Joe Pradat singled, and pinch runner James Poropatic stole second before scoring on a Sims base hit up the middle.

In the sixth inning, it was Jacob Gassert coming through with a two-run single to pull the Panthers even.

The Panthers also scored two runs in the third inning on a Casey Bell double and a Sauls base hit.

Blake Butcher had three hits for the Panthers, and seven other players had at least one hit.

Zach Tatham threw two scoreless and hitless innings to get the win.

The Panthers didn’t need any late-game dramatics to win the second game.

After starter Josh Smith set the Majors down in order in the top of the first inning, the Panthers went to work in the bottom of the inning.

Eleven men came to bat in the inning, and the Panthers scored seven runs on seven hits.

Blane Swift and Bell each had two-run singles, Butcher had an RBI double, and Gassert and Sims each knocked in a run with a base hit.

The Panthers added a single run in the second inning.

Sauls and Butcher reached on back-to-back doubles, and Sauls scored on a groundout by Swift.

The Panthers scored two more runs in the fifth inning on a run-scoring single by Poropatic, and an RBI groundout by Tripp Bridges.

Sauls and Butcher each had two hits, and Swift drove in three runs.

Smith pitched 5 2/3 innings and allowed one run on two hits to get the win, and Austin Perez got the final out in the sixth inning.

Zach English pitched a scoreless seventh inning to finish it.