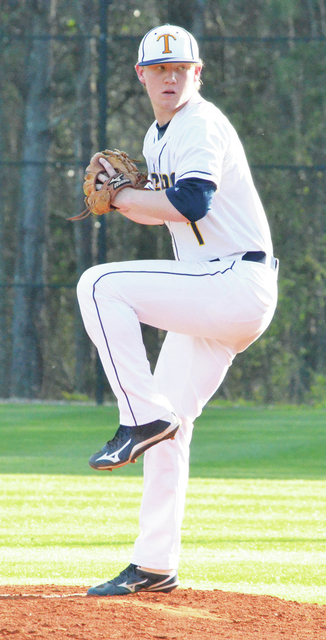 TYRONE – The Troup Tigers had no trouble with the Sandy Creek Patriots.

In a Region 5-AAAA road game on Tuesday, Troup needed just five innings to dispatch Sandy Creek 14-3 in the first game of a three-game series.

Troup will be the host team on Thursday, and the scene will shift back to Sandy Creek for Friday’s series finale.

Troup (13-5 overall), which was coming off last week’s trip to Florida for the IMG National Classic, maintained its position atop the region standings with a 6-1 record.

Whitewater, the defending region champion, is in second place in the region at 6-3.

Tuesday’s game was close for a few innings.

The Tigers were clinging to a 2-1 lead when they scored two runs in the third inning and three more in the fourth to go up 7-1.

Winston Turner got the start for Troup, and he pitched all five innings to get his seventh win of the season, and he also had a double.

Colby Williams had one of the big hits for Troup, a bases-loaded double that drove in three runs.

After this week’s games, Troup will play Fayette County three times next week before closing the regular season with three games against Whitewater.