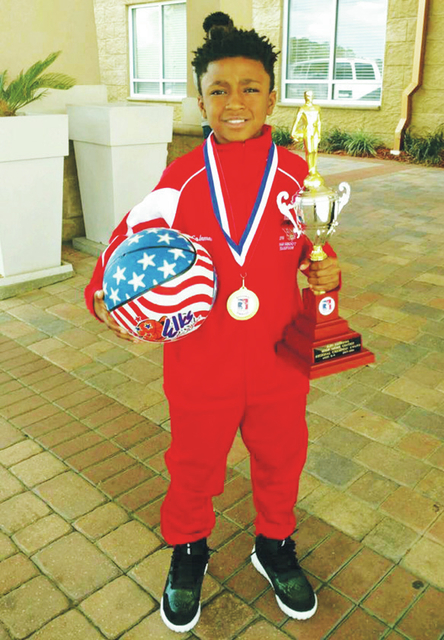 Deshun Coleman, a student at Callaway Elementary School, will participate in a national free-throw shooting competition later this month in Chicago. Contributed photo

http://lagrangenews.com/wp-content/uploads/sites/37/2016/04/web1_Coleman.jpgDeshun Coleman, a student at Callaway Elementary School, will participate in a national free-throw shooting competition later this month in Chicago. Contributed photo

HOGANSVILLE – His family may get anxious when he’s out there on the court by himself shooting free throws, but for Deshun Coleman, it’s no big deal.

Coleman, a student at Callaway Elementary School, has proven himself to be an expert when it comes to making free throws.

He has won free-throw competitions on the local, district, state and regional levels, and now he’ll get to face off against shooters from across the country in a national competition.

Coleman will be one of the participants in the Elks Hoop Shoot National Finals that will be held in Chicago on April 16.

“It sounds like it’s going to be a real nice event for the kids,” said Paulette Coleman, Deshun’s mother. “We’re looking forward to it. We’re very excited.”

Coleman has been watching her son shoot free throws at numerous competitions over the past few years, and she said “we’re more nervous than him. Me and his dad, we can hardly sit down and watch.”

If Deshun feels any nerves when he’s at the free-throw line, it doesn’t show.

At his four previous competitions, he has never made fewer than 22 out of 25 free-throw attempts, and he didn’t miss any at the state competition.

Deshun, whose favorite basketball player is LeBron James, said “I just like shooting,” and he obviously has a knack for it.

At the local competition that was held at the Griggs Center, Deshun was 23-of-25 from the free-throw line to finish first.

Next up was the district competition in Albany, and Deshun was on target once again, making 23-of-25 attempts to nail down another first-place finish.

Deshun then went to a state competition in Conyers, and he was a perfect, making all 25 of his free-throw attempts to place first yet again.

The state victory qualified Deshun for the regional competition in Valdosta, and he was 22-of-25 from the line to secure another win that earned him an invitation to the national finals.

At the previous competitions, Deshun was shooting against five other players in his age division.

At the national competition, there will be a total of 12 shooters in Deshun’s age group, and the winner will be the shooter who makes the most out of 25 free throws.

Deshun will have plenty of support, with 14 members of his immediate and extended family set to make the trip to Chicago with him.

Paulette Coleman said Deshun has been playing basketball since he was 4-years-old, and that he’s the member of a travel basketball team.

“A lot of this is passed down from generation to generation,” she said. “His dad plays, and he was fortunate enough to get a basketball scholarship to Valdosta State University. He has an older brother that’s 13. He plays basketball, baseball and football.”

Coleman said she’s appreciative of all of the support Deshun has received from members of the community, including one of his biggest fans, Robyn McCann, a physical education teacher at Callaway Elementary.

“She came to Conyers to support him (at state),” Coleman said. “She’s been very supportive.”

OF NOTE: To follow Deshun’s progress at the national competition, go to www.elks.org/hoopshoot.