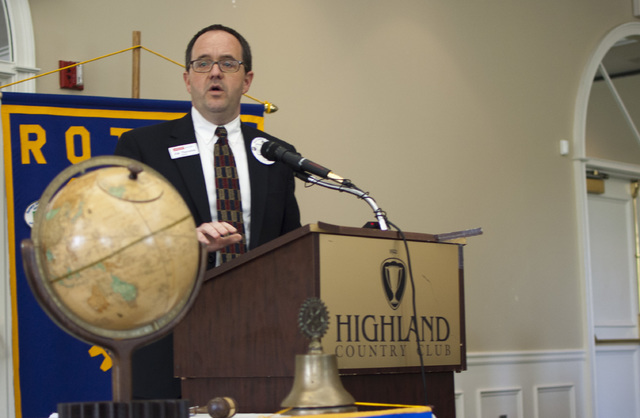 LaGrange Mayor Jim Thornton gives his annual State of the City address Wednesday during a meeting of the LaGrange Rotary Club at Highland Country Club.

http://lagrangenews.com/wp-content/uploads/sites/37/2016/04/web1_StateOfCity01WEB.jpgLaGrange Mayor Jim Thornton gives his annual State of the City address Wednesday during a meeting of the LaGrange Rotary Club at Highland Country Club.

LaGRANGE — Mayor Jim Thornton on Wednesday gave his annual State of the City speech, saying LaGrange was both financially strong and resourceful in its enterprise activities.

During a meeting of the LaGrange Rotary Club at Highland Country Club, the first-term mayor said the city’s business-like approach to civic policy has made possible its $110 million balanced budget and $50 million reserve.

“For 17 years, we have not levied property tax,” Thornton said, calling the city efficient and cost-effective. “From my perspective as mayor, the city is in good shape.”

During his speech, Thornton called on other city officials and community organizers to speak on their activities and ongoing projects.

“One of the things that is very apparent is that it takes a village,” he said of running Troup County’s largest city. “It’s a collective effort of so many people.”

Dekmar said the police department will seek funding for a drone, or unmanned aircraft. He said the drone would only be used in “high-stakes” scenarios and would have strict criteria for its operation. It would not be a vehicle that continuously monitored the city, Dekmar stated.

Pivoting to a lighter topic, Thornton asked Interim City Manager Meg Kelsey to tell the audience about the city’s Youth Council program, which launched in 2015.

“The inspiration came from a high school student … who approached the mayor,” Kelsey said. After meeting with Thornton, City Council created the Youth Council by ordinance in January 2015, along with its seven-member adult advisory committee.

The program has space for 24 young people — high school juniors and seniors — and in its first year attracted 19 students, primarily from LaGrange High School. The Youth Council meets twice monthly and is working to help plan entertaining events for young people, and is learning about municipal government and parliamentary procedure, Kelsey said.

Robert Tucker, a community organizer, spoke about his organization’s efforts to revitalize the Calumet Village and his group’s ongoing plans.

“In any depressed neighborhood, the goal is to have a plan,” Tucker said.

He explained an association of Calumet neighbors has crafted a five-phase plan for the historic mill neighborhood. Tucker and his group are eyeing street safety improvements, job training for young people, pre-kindergarten and prenatal education and development of quality housing. He touted the already completed Calumet Park, an initiative that his group spearheaded in conjunction with the city.

Tying in to the Calumet revitalization, self-proclaimed “trailblazer” Susan Bowie explained to the audience a bike-path initiative underway in the city.

City planners and officials are working with The Path Foundation of Atlanta to conceptualize a multi-mile bike and walking trail that would connect various parts of the city, Bowie said.

The Path Foundation has previously designed similar projects, including the Atlanta Beltline, the Carrollton Greenbelt and the Silver Comet Trail.

“They are the premiere trail builders in this area,” Bowie said. “They can pick and choose who they work with, and they chose us.”

Overall, the mayor said the strong state of the city was not the doing of he or City Council, but rather the collective efforts of elected officials, city administrators and employees and area residents.

“Part of my goal is to demonstrate it’s not about me, or the council,” Thornton said. “I appreciate the opportunity to serve as mayor — I enjoy it.”