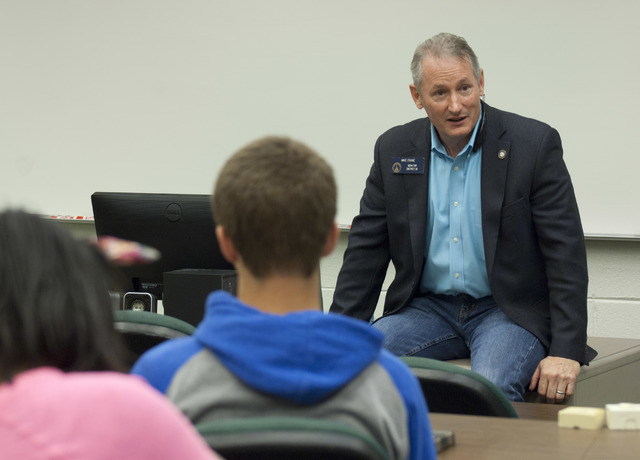 Mike Crane, a candidate for Georgia’s 3rd Congressional District and a state senator from Newnan, speaks with LaGrange College students Thursday at the Callaway Science Building.

http://lagrangenews.com/wp-content/uploads/sites/37/2016/04/web1_MikeCraneWEB-1.jpgMike Crane, a candidate for Georgia’s 3rd Congressional District and a state senator from Newnan, speaks with LaGrange College students Thursday at the Callaway Science Building.

LaGRANGE — Congressional candidate and state Sen. Mike Crane said Thursday if elected, he would consider changes to Social Security, telling a group of LaGrange College students the entitlement program was a “redistribution of wealth” and was not sustainable.

“What’s happening to us now with Social Security? … The retirement age is still low. Does the math work anymore? No. That’s why it’s bankrupt. That’s why they are printing money,” he told the students.

Crane, 53, a Newnan businessman, is a Republican vying for Georgia’s 3rd Congressional District currently held by U.S. Rep. Lynn Westmoreland, who is retiring after this term.

During a talk to students, Crane blamed increasing life expectancy and a low retirement age for the program’s projected shortfalls.

Reports by Social Security Administration’s Board of Trustees estimate the Old-Age, Survivors and Disability Insurance Trust Fund would be depleted some time between 2033 and 2036, under current economic and demographic assumptions.

“If no legislative change is enacted, scheduled tax revenues will be sufficient to pay only about three fourths of the scheduled benefits after trust fund depletion,” according to the Social Security Administration’s website.

Crane stopped short of saying he would consider scrapping the program altogether, and said he would seek “a mathematical solution that will keep the promises intact, but not bury us in the future.”

“When it (the ratio of taxpayer to retiree) hits one to one, you will be working entirely to support someone in retirement,” Crane told students. “There’s a mathematical solution to the problem nobody wants to solve, because they want to get re-elected and they think they won’t get re-elected if they don’t solve this problem.”

Social Security wasn’t the only topic Crane discussed with students for about an hour. As a businessman in the construction sector, he spoke about the housing crisis following the Great Recession and its impact on Georgia’s economy. He said steps taken by the federal government after the recession “interjected into the market place and people’s personal lives.”

He also said the federal government was operating outside of its powers, and that he was seeking office to “get government back on the reservation.”

“The federal government has gone way outside of its innumerated powers,” he said.

He also chided law enforcement’s use of so-called “no-knock warrants,” and said he believed that potentially violated the 4th Amendment, which protects Americans from unreasonable search and seizure.

The winner of the primary will face a Democratic candidate in the Nov. 8 general election.