LaGrange man who helped police: ‘I just did what came natural’ 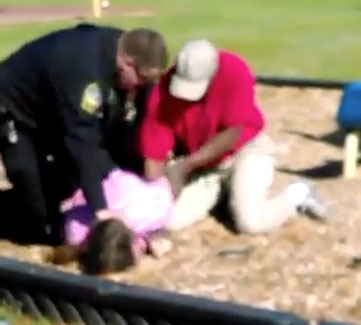 LaGRANGE — Carlos Whitfield will be the last person to call himself a hero.

He may not wear a cape, change into a cool disguise, or possess superhero powers, but the LaGrange man showed courage and strength Saturday on a playground in the Lucy Morgan Homes on Borton Street.

Whitfield jumped in to help LaGrange Police Officer Brady Pike, who was being attacked by David Lloyd Noles Jr., 52. Noles is allegedly the man seen on cellphone footage punching Pike in the face in front of several children and parents.

Whitfield estimated there were 10 to 20 children playing in the park at the time.

“I just did what came natural … showed Christianity and compassion,” Whitfield explained. “I think anyone who professes to be a Christian would’ve done likewise.”

LaGrange Public Safety Chief Lou Dekmar said Pike was responding to a 911 call about Noles creating a disturbance at the playground.

Whitfield said he was working on a water leak behind a nearby building when he spotted a man, later identified as Noles, carrying a baby and playing with kids. He then saw Pike pull up to the playground.

“ … That’s when I heard voices being raised and I heard the guy (Noles) call the officer (Pike) a ‘punk’ and a ‘sissy,’” Whitfield told the Daily News. “I thought, ‘Wow.’”

Pike commanded Noles twice to put the child down, Whitfield said. The man said Noles complied after the second time, but then immediately swung at the officer and hit him in the face.

“ … I was so shocked. Then they started wrestling and got tangled up … and then they went to the ground,” Whitfield remembered. “Then I heard,’ Help, help.’ I thought at that point he (Noles) was going for the officer’s gun. That’s when I ran over to help.”

In the first of two videos, the man identified as Noles continually swings at Pike, who pushes Noles to the ground to try and subdue him. The video shows Noles continue to resist Pike and hit him in the face again.

LaGrange Public Safety Chief Lou Dekmar said during the struggle, Pike’s body pack, including his camera and radio, fell off. But Pike was able to ask witnesses to call 911 and ask for help, which they did, stated Dekmar.

A witness also captured Whitfield’s actions in the second of two videos she recorded with her cell phone.

He held down Noles’ arm and head while Pike subdued him. When a second unidentified LPD officer arrived on scene, Whitfield continued to help police by pinning Noles to the ground as they tried to handcuff him.

The video shows Noles still struggled with Whitfield and officers, and even tried again to hit Pike in the face.

Whitfield said he never once questioned his own safety during the incident.

Whitfield said he did not stick around after Noles was taken into custody.

“I asked the officer if he was okay, because he was bleeding,” he stated. “Then I just stood around for a second, gave the officer his flashlight and walked away.”

Whitfield said he went right back to work fixing the water leak.

There was no grand exit like a comic book superhero, no pats on the back and no congratulatory words of a ”job well done.”

Whitfield said he is okay with that. He told the Daily News he was even shy about having his picture published in the paper.

“I’m just glad that no one got seriously hurt,” he said. “I don’t know the officer. But taking from the Bible, if you see someone in need, help them out. At that time, there was someone desperately in need. The officer has a gun and there were kids around. I didn’t know if the gun would get taken or how the incident would escalate … so I jumped in.”

Dekmar told the Daily News he spoke with Whitfield by phone on Thursday.

The chief said he and the city of LaGrange plan to honor Whitfield’s bravery and support for the police department at the April 26 City Council meeting.

“We’re very pleased that Mr. Whitfield behaved in a way that is a gold standard for citizenship by rendering aid to our officer and choosing to be a part of that component of the community that makes a difference,” Dekmar stated. “We look forward to recognizing him formally at the City Council meeting.”

But when the Daily News asked Whitfield if he would do any of those acts of kindness over again, he did not hesitate to answer.

Whitfield said he has not spoken to or officially met Pike yet.

Dekmar said he hopes to introduce the two men at Whitfield’s recognition ceremony at the end of the month.

Pike had a bloody nose and some cuts from the attack, stated Dekmar.

Noles was charged with felony obstruction and disorderly conduct.