Shaw no match for LaGrange’s Farrar 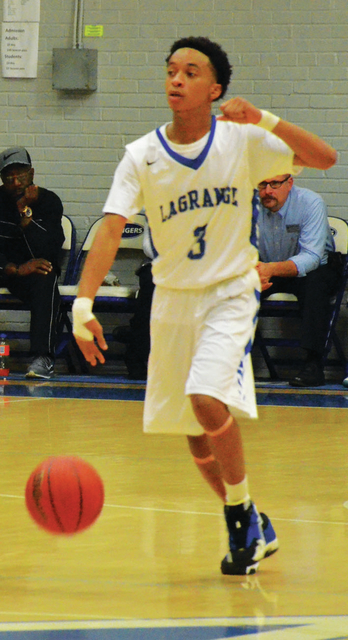 LaGrange’s Larkin Easterwood had a hit and an RBI to help his team beat Shaw in a Region 1-AAAAA game. Kevin Eckleberry | Daily News

http://lagrangenews.com/wp-content/uploads/sites/37/2016/04/web1_LHS2.jpgLaGrange’s Larkin Easterwood had a hit and an RBI to help his team beat Shaw in a Region 1-AAAAA game. Kevin Eckleberry | Daily News

LaGrange’s Ben Anderson had a double and a pair of walks during Thursday’s game. Kevin Eckleberry | Daily News

http://lagrangenews.com/wp-content/uploads/sites/37/2016/04/web1_LHS1.jpgLaGrange’s Ben Anderson had a double and a pair of walks during Thursday’s game. Kevin Eckleberry | Daily News

LAGRANGE – From the first batter of the game, a strikeout victim, LaGrange High’s Jake Farrar was in command.

Farrar delivered a brilliant pitching performance on his home field on Thursday, tossing a three-hit shutout as LaGrange rolled to a 9-0 win over the Shaw Raiders.

It was an important win for the Grangers, who improved to 6-5 in Region 1-AAAAA and moved into fourth place in the region, a half-game ahead of the Hardaway Hawks.

LaGrange, which beat Columbus on Tuesday, will look to complete a perfect week with a road win over Shaw today.

Earlier this season, LaGrange beat Columbus, only to turn around and lose its next game to Shaw.

History did not repeat itself on Thursday, and Farrar was a big reason why.

“For the most part he commanded the strike zone, he was moving the ball in and out. He was really good,” LaGrange head coach David Smart said. “He did exactly what we needed him to do.”

It was a stress-free day for Farrar, who never allowed more than one Shaw batter to reach base in an inning.

Farrar said the game plan was to “just go out there and throw strikes, and let them hit it, and let my defense work, and not try to strike out too many people. I felt comfortable on the mound again.”

“I’ve been playing with Jake since I was like 5-years-old, and that’s the best I’ve ever seen him,” Howard said. “He was awesome tonight. He threw tons of strikes, and got guys out early. He had command.”

The Grangers knew how important Thursday’s game was.

As big as the win over Columbus was, LaGrange’s playoff hopes would have taken a major blow with a loss to Shaw.

“The last time we beat Columbus, we just came out dead against Shaw,” Howard said. “We talked about it as a team last night and today, that we were not going to let that happen again. We were going to get after them. We’re going to do the same thing tomorrow. We’ll come out and try to beat them the same away tomorrow.”

The Grangers have seven region games remaining, and Smart said they’re all important.

“They all count the same. They’re all big,” Smart said. “We have the same mentality for each and every one of them. We’re just trying to collect as many wins as we can, and see where we stand at the end.”

In Thursday’s game, the Grangers left the bases loaded in each of the first three innings, but they still managed to take a 5-0 lead.

LaGrange continued to add on runs throughout the game, and it capped the scoring with three insurance runs in the bottom of the sixth inning.

Farrar also got it done at the plate with a hit and two RBIs, and leadoff hitter David Sweat had a hit, three walks, and he had three RBIs and three runs scored.

Larkin Easterwood had a hit and an RBI, Champ Willis drove in a run, Ben Anderson had a double and was on base three times, and Willis Kemp and Matthew Anderson each had a hit.

LaGrange got the scoring started with a run in the bottom of the first, with Sweat leading off with a single and later scoring on a Farrar base hit.

LaGrange pushed three more runs across in the second inning.

Farrar and Willis both walked with the bases loaded to drive in runs, and Easterwood had an RBI on an infield single.

The Grangers extended the lead to 5-0 in the third inning when Ben Anderson reached on an error to bring in Matthew Anderson, who had a leadoff walk.

Ben Anderson’s RBI double in the fifth inning gave the Grangers a 6-0 lead, and they capped the scoring with three runs in the bottom of the sixth.

Two of the runs in the inning scored when Trevor Norris and Ben Anderson reached on errors, and Sweat’s bases-loaded walk produced another run.

Farrar finished the Raiders off in order in the top of the seventh, and he ended the game with a flourish, striking out the final batter.

“It was a really great win,” Farrar said. “We did everything right.”