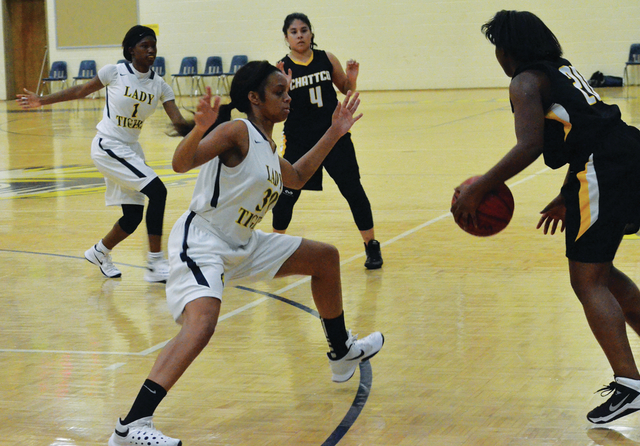 Troup second baseman Winston Turner flips the ball to second base for a force out during Thursday’s game. Kevin Eckleberry | Daily News

http://lagrangenews.com/wp-content/uploads/sites/37/2016/04/web1_troup14.jpgTroup second baseman Winston Turner flips the ball to second base for a force out during Thursday’s game. Kevin Eckleberry | Daily News

LAGRANGE – The Troup Tigers will end the regular season with three critical games against Whitewater that will most likely determine the region championship.

Before Troup gets to Whitewater, though, it needs to take care of business against Sandy Creek and Fayette County.

After opening a three-game series against Sandy Creek with a 14-3 win on Tuesday, Troup returned home and got a 9-4 win on Thursday.

The teams will wrap up the series today at 5:30 p.m., with Sandy Creek serving as the host team.

Troup will then play Fayette County three times next week before turning its full attention to Whitewater, which won the region championship a year ago.

Troup (14-5 overall) improved to 7-1 in the region, and it maintains a nice cushion over second-place Whitewater, which is 6-3 in region play.

While Sandy Creek is not one of the region’s better teams, it did show what it’s capable of when it got a 10-8 road win over Whitewater, so Troup was taking nothing for granted.

“That’s always the case is to never overlook anybody, and take it one game at a time,” Troup head coach Craig Garner said. “Hopefully if we do what we’re supposed to do, then these should be some series also to get some guys some work, and get them some playing time, and kind of finalize a lot of those places where you may be looking for another pinch-hitter down the road, or somebody else that may be able to fill some innings pitching.”

The left-handed Upchurch has been one of Troup’s top pitchers this season, and he has excelled against some top-notch opponents.

In the opening game of the IMG National Classic against Windermere Prep (Fla.), Upchurch tossed a complete game, giving up no earned runs in a 6-1 victory.

Upchurch was also the winning pitcher in a big road win over Auburn, Ala. when he went four innings and didn’t allow an earned run while striking out six.

“He’s thrown some big games against some great competition,” Garner said. “He’s doing really well. We’ve got a lot of confidence in him.”

Colby Bridwell pitched the fifth and sixth innings, and he gave up two hits and two runs, although they were both unearned.

At the plate, sophomore shortstop Ryan Bliss showed off his pop with a solo home run in the fourth inning, and he had three hits and two RBIs.

Miles Cameron had a hit while driving in two runs, Jarred Helton walked twice and scored two runs, and Colby Williams had a hit.

The Tigers took charge early, scoring three runs in the bottom of the first inning.

Halcomb legged out an infield hit leading off, and Bliss followed with a base hit.

Turner then drove a 2-2 pitch into the outfield for a single, and Halcomb and Bliss both came around to score, giving Troup a 2-0 lead.

After Turner stole second and moved to third on an error, he scored on a Cameron sacrifice fly.

Helton walked and Halcomb singled, and with two outs, Bliss put down a perfect bunt for a base hit to load the bases.

Turner struck again for a two-run single, and Cameron’s base hit drove in another run to put Troup on top 6-0.

With one out in the fourth inning, Bliss drove the ball over the left-field fence for a home run, and the Tigers were ahead 7-0.

Sandy Creek scratched two runs across in the top of the fifth inning to get within five, but Troup answered with two runs of its own in the bottom of the inning.

Brandon Gay had a one-out single, and after Kinley Bridwell reached on an error, Halcomb’s two-run single gave Troup a 9-2 cushion.

Sandy Creek scored two runs in the seventh inning to climb within five once again, but Tolbert got a flyout to end the game.