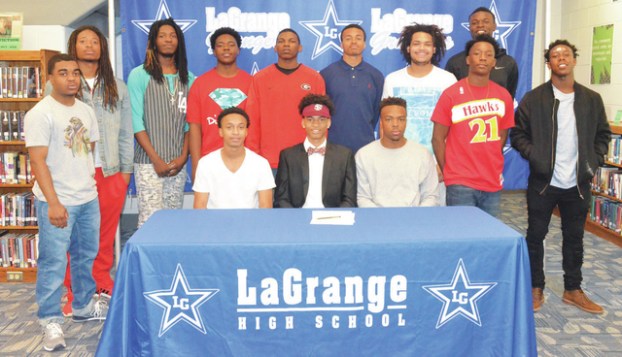 LAGRANGE – When his opportunity arrived, he embraced it.

Before his senior season, LaGrange High’s Alex Dantzler had been a rarely-used player, a guy would get some minutes in the late stages of a blowout game.

That all changed last season.

As first-year head coach Mark Veal looked at his roster, and evaluated the players who he’d lead onto the court, he felt that Dantzler could be a major contributor, primarily as an outside shooting threat.

So as the Grangers kicked off a new season, Dantzler wasn’t a starter, but he was usually one of the first men off the bench, and he provided instant offense.

Dantzler was an exceptional shooter who usually made multiple 3-pointers in a game, and he was a key reason the Grangers won a second consecutive Region 1-AAAAA championship and made it to the second round of the state tournament.

As a result of his productive senior season, Dantzler began to receive interest from college teams, and on Friday during a ceremony in the school’s media center, he signed a letter of intent to play basketball at Fort Scott Community College in Kansas.

For Dantzler, who has experienced plenty of disappointment during his basketball career, it was a special moment.

“It motivated me,” Dantzler said of his struggles to succeed. “I didn’t make the middle-school team. I didn’t make it ninth-grade year. And I’ve been playing JV ball in the 10th and 11th grade. I just had to work hard every day. I’d go to the gym at 5 in the morning just shooting jumpers.”

Now he’s about to be a college basketball player, and that makes his high-school coach happy.

“I don’t ever remember Alex missing practice, being late,” Veal said. “It is a great success story. He really worked hard. I’m very proud of him.”

Part of the reason Dantzler struggled to find playing time was because of the depth LaGrange has had at the guard position over the years.

For the past three seasons, Derieko Smith and LaPerion Perry have had two of the guard positions locked down, and LaGrange has had numerous other outstanding perimeter players as well.

Smith and Perry were once again the two primary guards, and Veal had a handful of other outstanding shooters to choose from.

“We had some really good guards, and he was able to separate himself,” Veal said. “He definitely had a skill. He hit a lot of big threes this year. He also had a lot of defensive hustle plays. Some of those 50-50 balls we always talk about, he got those.”

Dantzler’s mother, Valerie Dantzler, was his number one cheerleader, and she encouraged him to achieve his dreams.

“I said if you want playing time your senior year, you’ve got to put in the work,” she said. “He did. I’m proud of him.”

Alex Dantzler said he appreciates what his mother, and all of his family members, friends, and coaches have done for him.

“I know they’ve got my back,” he said. “They helped me get better every day.”

Now that he’s getting the chance to play college basketball, Dantzler plans on making the most of it.

“I want to lead the conference in scoring, have the best 3-point percentage, and I want to move on to a higher level after those two years,” he said.