‘Can we get an intern to do this?’ 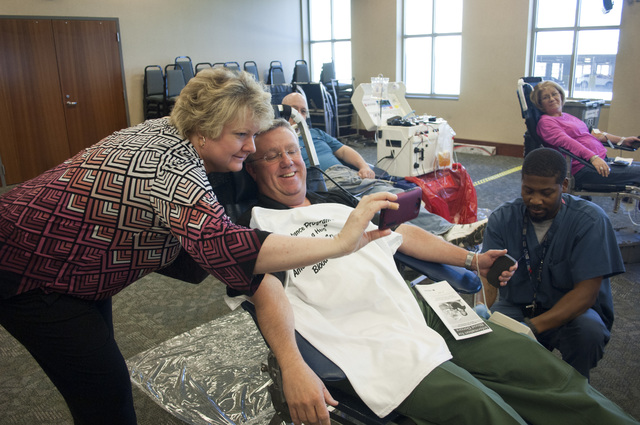 Sharon Woodruff takes a selfie with her husband, Troup County Sheriff James Woodruff, as he donates blood Friday at the government center on Ridley Avenue.

http://lagrangenews.com/wp-content/uploads/sites/37/2016/04/web1_BloodDrive02WEB.jpgSharon Woodruff takes a selfie with her husband, Troup County Sheriff James Woodruff, as he donates blood Friday at the government center on Ridley Avenue.

As Troup County Sheriff James Woodruff waited — by his own admission, anxiously — to donate blood, Skandalakis handed him a T-shirt for participating, and jokingly asked an American Red Cross worker, “can we get an intern to do this?”

The worker, Melissa Hardman, Skandalakis and Woodruff all had a laugh, but in reality donating blood is serious business.

Every two seconds in the United States, someone is in need of blood, and one victim of a car wreck can need as many as 100 pints of blood, according to the American Red Cross. Each volunteer gives about one pint of blood during a single donation.

“We usually have a pretty good turn out each year,” Skandalakis said. “And two other offices (in the Coweta Judicial Circuit) are also doing this today — Carroll and Coweta (counties).”

The annual blood drive is in conjunction with National Crime Victims’ Rights Week. The week is aimed at raising awareness of the hardships faced by those who have suffered from crimes, as well as highlight the people who advocate on their behalf, such as Skandalakis’ staff members Phyllis Williams and Nicky Matthews.