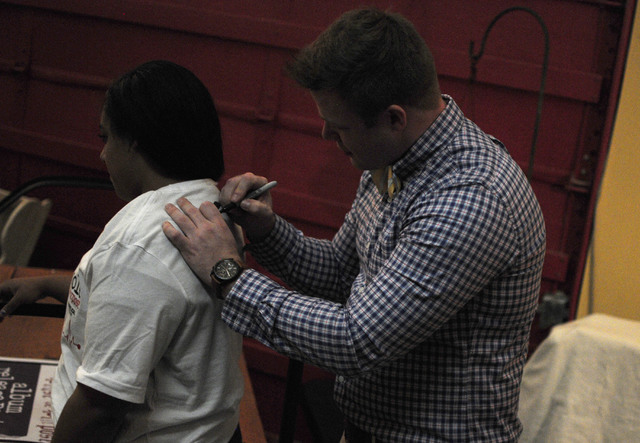 Musician Daniel Toole signs the back of Kaison Echols’ shirt during a CD release party at Pure Life Studios on Saturday.

http://lagrangenews.com/wp-content/uploads/sites/37/2016/04/web1_web0411TooleRelease02.jpgMusician Daniel Toole signs the back of Kaison Echols’ shirt during a CD release party at Pure Life Studios on Saturday.

LaGRANGE — For LaGrange singer-songwriter Daniel Toole, the packed room at Pure Life Studios on Clark Street was the culmination of a childhood dream.

“I remember being a little kid and thinking about (performing), but not really having the nerve to do it,” he said as fans started to pour into the small music venue Saturday for the release part of his album, “Pulse and Purpose.” “I guess I was just a big dreamer rather than doing anything to put it in motion.”

That changed about three years ago, when a friend, who was an events coordinator, mentioned to him that she had heard him play guitar before, but not sing. She decided to book a show for him to perform for a crowd with three weeks’ notice, a daunting proposition for the self-described shy musician.

“I played that first show and I was just completely frightened,” he said. “I had 13 songs I’d learned over the time I had to learn them, and I had to make it stretch for like three hours. It’s all the material I had. That said, it was kind of nerve-wracking, but I just played a lot of guitar between songs and connected with the crowd and did the best I could to make that time work, and people kind of latched onto it — and here we are.”

Though he got a late start as a performer, Toole said music has always been a passion and influential to his life.

“I remember being a little kid, I was subjected to it a lot. My mother was very soulful, there was always music going on,” he said. “My stepfather, my dad, there was always some music on his behalf, there was always diff types of music. … Circumstantially, music has just always been a very, very big influence in my life. But I guess never really anticipated doing this.”

His mother’s passion for music and influence on his life played a big part in the album, which bears a rose, the same as his mother’s name, Rose. Toole said being able to release the album digitally on his mother’s birthday was significant for him.

“My mother was — there aren’t enough adjectives in the English vocabulary to describe what she means to me, but I was able to release the album digitally on her birthday, and I lost her seven years ago, and that was just paramount for me — important for me to release on her birthday and do the things I wish she was around to see,” he said. “It just means a lot for me to honor her in that way and everything done in day to day life to honor her.”

The release also was the inaugural release for local Neobolical Records, a label started by brothers Josh and Sandy East.

“We are extremely excited about it,” said Josh East. “We’ve put a lot of work into it. Not only have we polished this product, but we did it in half the time it was supposed to be done.”

“We did it in about a third of the time it was supposed to be done,” responded his brother.

The ahead-of-schedule release topped an already tight deadline — they had set the goal to get the album out by Toole’s mother’s birthday — which posed a challenge for Toole and the Easts, but they said the process went smoothly, while being a learning curve for all involved. It was recorded in Toole’s home, the Neobolical recording space and during two live performances.

There was one other hitch. A technical glitch prevented the CDs from being available at the release party, but attendees still could see Toole perform and get a certificate for a digital download of the album. CD deliveries for those who pre-ordered were expected to begin this week.

With their first CD under their belt, the Easts are looking at signing more artists and releasing more albums. The brothers said they are hoping Neobolical will be a label that harkens back to when it was the record company’s job to support the artists, not just make money.

As fans got ready to shake hands and have Toole sign their merchandise, the musician admitted he was nervous, but excited.

“There are a lot of nerves, definitely. I’m just trying to keep calm,” he said. “I prayed a lot. I pray for the simple things and want to perform well for the people … I don’t ever go on stage without saying a prayer before, and it just seems to always get better and better. I really believe in that and stand beside it, and it’s the same way I’ve carried out things today.

“… I can honestly say if the album sells 300 or 3 million, I’m already living such a massive dream. I’ll remember these things whenever I’m 80 years old. I’m already living such a huge dream and wherever I go, I know I’ll be happy with it, because I’m continuing to learn and have got such a great set of peers to look up to, so many people I learn from locally and people I’m lucky to be subjected to locally.”

Police crack down on felons trying to buy guns