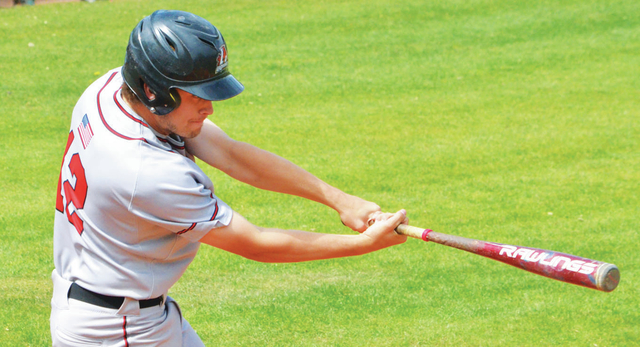 LaGrange College’s Keith Sims gets a sacrifice bunt down during the seventh inning of Sunday’s game. Kevin Eckleberry | Daily News

http://lagrangenews.com/wp-content/uploads/sites/37/2016/04/web1_LC6-27.jpgLaGrange College’s Keith Sims gets a sacrifice bunt down during the seventh inning of Sunday’s game. Kevin Eckleberry | Daily News

LAGRANGE – It was a heck of a ride.

The LaGrange College Panthers brought a 14-game winning streak into Sunday’s home game against the Maryville Scots as they looked to finish off a three-game sweep.

The Panthers rallied from a 3-0 deficit to pull even and force extra innings, but it was the Scots prevailing 6-5 in a marathon game that went 15 innings and lasted more than four hours.

While the Panthers didn’t want to see their winning streak come to an end, the loss didn’t impact their position in the USA South standings.

The Panthers would have finished second in the conference whether they won or lost on Sunday, and they’ll be the number two seed for the USA South tournament that begins on Thursday.

The Panthers (27-11 overall) closed the regular season with a 13-5 conference record, and they finished two games behind Averett (15-3).

After dropping a road game to Berry College on March 8, LaGrange College got a 9-0 road win over Huntingdon on March 11, and that was the start of a win streak that continued through Sunday.

LaGrange College blew out Maryville in the first two games of the weekend series.

After winning the series opener 14-6 on Friday, the Panthers battered the Scots 19-4 on Saturday to sew up the USA South’s number two spot.

In Sunday’s game, the Panthers trailed 3-0 after the fifth inning, but they score two runs in the sixth inning and one more in the eighth inning to pull even.

It remained a 3-3 game until the Scots scored twice in the top of the 13th to take the lead, but the Panthers answered with two runs in the bottom of the inning to tie it once again.

The Scots pushed a run across in the top of the 15th inning to reclaim the lead, and this time the Panthers were unable to keep the game alive.

Trailing by three, the Panthers got back into it with a two-run sixth inning.

Cain Sauls had a one-out double, and Blake Butcher drove a two-strike pitch into center field for a base hit, and the Panthers were on the board.

Blane Swift then blasted the ball to right field for a triple, and the Panthers were within a run.

LaGrange College tied it in the eighth inning.

Once again it was Sauls getting things started with a base hit that glanced off the second baseman’s glove.

Pinch runner James Poropatic stole second, and he later scored on a Joe Pradat infield single, and the game was tied 3-3.

The Scots struck for two runs in the top of the 13th, only to give the lead right back.

In the bottom of the 13th, Jacob Gassert doubled, Keith Sims was hit by a pitch, and a run scored when Tavin Thompson reached on an error.

With two outs, Elijah Braque’s base hit tied it, but the Panthers were unable to produce the winning run.

In the top of the 15th, Sam Jokerst gave the Scots the lead with an RBI single, and the Panthers went down in order in the bottom of the inning.

Thompson, Sauls, Swift and Pradat each had two hits for the Panthers.

Blake Schuck followed Fleckenstein, and he also got it done, giving up no runs or hits in three innings.

In Saturday’s game, it was all LaGrange College.

The Panthers busted it open with six runs in the first inning, and they banged out 18 hits.

Butcher had four hits, including two doubles, and an RBI and three runs scored.

Starting pitcher Ryan Broaderick, who went five innings to get the win, was the beneficiary of the offensive outburst.