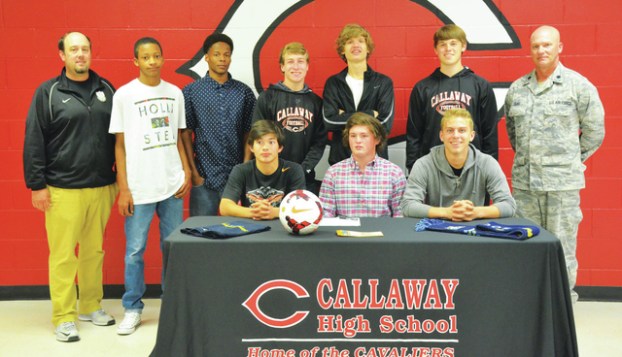 Callaway’s Spinks ready for next step

Cameron Spinks with some of his teammates and coaches on the Callaway High soccer team. Kevin Eckleberry | Daily News

http://lagrangenews.com/wp-content/uploads/sites/37/2016/04/web1_spinks6.jpgCameron Spinks with some of his teammates and coaches on the Callaway High soccer team. Kevin Eckleberry | Daily News

HOGANSVILLE – For Callaway High’s Cameron Spinks, there have been no shortcuts.

He has known for years that he wanted to be a college soccer player, so he set out to make that a reality by working as hard as he could throughout the year.

That dedication has paid off.

Spinks, a senior on the Callaway soccer team, has signed a letter of intent to play at Point University.

He made it official during a signing ceremony on Monday at Callaway High, with those closest to him there to share in the experience.

Among those who were there on Monday was his sister, Karsin Spinks, who is a sophomore on the Samford University softball team.

Cameron Spinks was there for his sister’s signing day a few years back, and on Monday afternoon, he was the one in the spotlight.

“It’s kind of surreal to be here when I think about it, going back to recreation soccer, all the way up to travel and high school,” Spinks said.

Spinks said he was glad to have his family members, friends, and coaches there to enjoy the moment with him.

“It means a lot to see everybody come together,” he said.

“It’s exciting,” Hembree said. “It’s always fun to have that, to be able to see hey we’ve got a college player.”

Hembree said the commitment Spinks has shown is why he’s getting this chance.

“To excel at the next level, you have to play year-round,” Hembree said.

“From his first year until now, we’re miles ahead of where we used to be,” Hembree said. “He’s helped develop it a lot.”

OF NOTE: For more photos from Monday’s signing-day ceremony, check out facebook.com/LDNsports