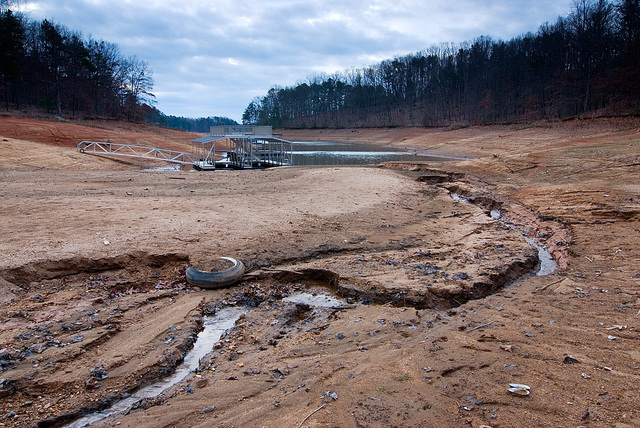 LaGRANGE — The basin that includes the Chattahoochee, Apalachicola and Flint rivers is the country’s most endangered, according to a study released today by the conservation nonprofit American Rivers.

The annual America’s Most Endangered Rivers report says chronic mismanagement of the rivers, coupled with legal jockeying between Florida, Alabama and Georgia over water control has “put the basin at a breaking point.”

Excessive water use, mishandling by the U.S. Army Corps of Engineers and political gridlock have caused disastrous consequences for Florida’s Apalachicola Bay, the report says. Oyster, crab, shrimp and other species in the bay — where the rivers deposit into the Gulf of Mexico — were “decimated in 2012 and have scarcely recovered since,” the report states.

American Rivers uses the report to call on policy makers in Florida, Alabama and Georgia to develop long-term sustainability plans for the river system, and urges the Army Corps to vary the water flow to maintain the health of the Apalachicola River, floodplain and bay system. Without changes, “the bay is headed for irreversible ecological collapse,” a statement from American Rivers says.

“It’s time to move from water conflict to a new era of cooperation,” said Ben Emanuel, an Atlanta representative of American Rivers. “This basin is ground zero for water supply challenges, but it is also fertile ground for new and sustainable water supply solutions.”

There are steps underway to improve the basin’s water management, according to James Emery, a Troup County engineer who represented the area as a board member of the Apalachicola-Chattahoochee-Flint Stakeholders, or ACFS.

The ACFS began in 2008 and today is a group of 56 members representing communities in Florida, Georgia and Alabama that have economic, environmental or other interests in the river basin. In May 2015, they introduced a sustainable water management plan aimed at achieving equitable water use and return, improving water storage and control, planning for drought years, strengthening basin coordination, and advancing scientific and technical knowledge for future decision making.

A significant recommendation of the report includes raising the winter water level of West Point Lake by nearly five feet.

“One of the things that’s relevant to our local area is raising the winter pool elevation (of West Point Lake) from 628 (feet above sea level) to 632.5,” Emery said. “Full summer pool is 635. Through modeling of the system, ACF Stakeholders determined it would be good for all users of the system if that rule was changed.”

The Army Corps, which plays a significant role in the way the basin’s water is managed, uses a water control manual that was last updated in 1958, according to the ACFS’s water management plan. Critics, including the American Rivers group, argue the methods are outdated and have failed to keep pace with Georgia’s growing population.

While the ACFS has made thorough recommendations about how to best manage the basin’s water flow, it is up to the Army Corps to revise the water control manual, a process it began in 2007. Just last year, the Army Corps published a draft environmental impact study as part of its consideration process. Public comments were taken between October 2015 and January 2016.

Jason Ulseth, of the Atlanta-based conservation nonprofit Chattahoochee Riverkeeper, said he’s pleased the Army Corps is considering changes, but said he and his organization are concerned about some of the proposals.

“One of the major concerns was they proposed to lower the water flows seasonally from Buford Dam (on the Chattahoochee River north of Atlanta) down into the city of Atlanta and down to West Point Lake,” he said. “We saw that as a major threat to the river system and downstream communities.”

Ulseth said the Army Corps should seriously consider the recommendations of the ACFS’s study, but recognizes the study was made by a nongovernmental group and is merely a compilation of suggestions to which all parties have agreed.

Pat Robbins, a spokesman for the Army Corps’ district office in Mobile, Alabama, said the process for updating the water control manual would involve a myriad of factors.

“This action (updating the water control manual) will result in updated plans and manuals that comply with existing Corps regulations, and reflect operations under existing congressional authorizations, taking into account changes in basin hydrology and demands from years of growth and development, new (or) rehabilitated structural features, legal developments and environmental issues,” Robbins said in a statement to the Daily News.

The matter is complicated by ongoing litigation between the states of Florida and Georgia. In 2014, the U.S. Supreme Court announced it would hear a petition brought by Florida against Georgia, in which Florida claimed its neighbor to the north was slurping up an unfair share of water upstream, causing damage to the Apalachicola Bay. Since then, the court has appointed a designee — called a “special master” — to oversee negotiations between Georgia and Florida.

Those negotiations are underway, but Ulseth and others at the Chattahoochee Riverkeeper are concerned about how talks between Florida and Georgia are being conducted.

“There’s a lot of behind-the-scenes negotiations that are taking place right now,” Ulseth said. “While we hope that those negotiations are constructive, we wish they were being conducted in a public and transparent manner. Right now, they (the meetings) are closed door and confidential, and we don’t know what’s going on at this time.”

Although Ulseth and others wish there was more transparency, state law allows officials to consider matters of potential litigation in private — and to negotiate those matters behind closed doors.

As inter-state talks continue, and the Army Corps develops its new water control plans, there is hope that a solution that fits the needs of all parties will be reached, according to the American Rivers group.

“In the (Apalachicola-Chattahoochee-Flint) Basin, the ACF Stakeholders process has brought about dialogue among representatives of all water use sectors in the three states around water management reforms,” the group said in a statement. “American Rivers and others in the upper Flint River basin have formed the Upper Flint River Working Group to foster dialogue and find sustainable management approaches.”

For more information about the America’s Most Endangered Rivers report, visit www.AmericanRivers.org/MostEndangeredRivers.