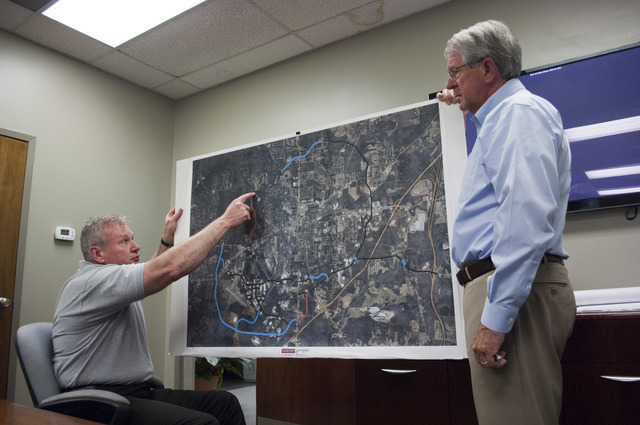 Council member Mark Mitchell points to the end of a proposed road on a map Tuesday during a City Council work session as road opponent Dupuy Sears looks on. Council approved the road in a 5-1 vote Tuesday night.

http://lagrangenews.com/wp-content/uploads/sites/37/2016/04/web1_Council.jpgCouncil member Mark Mitchell points to the end of a proposed road on a map Tuesday during a City Council work session as road opponent Dupuy Sears looks on. Council approved the road in a 5-1 vote Tuesday night.

LaGRANGE — City Council dealt a blow to opponents of a controversial road proposal Tuesday as they approved an agreement to move forward with a compromise design.

The proposed Northwest Connector, which would connect Vernon and Cameron Mill roads through undeveloped land owned by the Callaway Land Trust, was approved during Council’s meeting on a 5-1 vote; all but Council member Mark Mitchell voted in favor.

The compromise — aimed at quelling concerns about future roads — moves the road’s terminus from the entrance of Highland Country Club about 350 feet west toward Hollis Hand Elementary School.

Troup County commissioners must now sign off on the agreement for the project to go forward. The road’s construction is slated be managed by the city, but paid for by the county using special-purpose, local option sales tax.

Road opponents have raised apprehension with Council and the county commission since August, saying it could lead to the eventual completion of LaGrange’s bypass system through their neighborhood. Council has repeatedly refuted that concern, going as far as passing a resolution directing city staff to refrain from pursuing such a project. The resolution, though, cannot legally bind future councils.

Dupuy Sears, a Highland Country Club resident, represented his neighborhood at Council’s work session Tuesday morning, and questioned the process by which the road was planned.

“Only a handful of people participated in the planning of this new road,” he told Council. “What’s happening, pure and simple, is that the Callaway Foundation had that 2014 meeting and asked for SPLOST money. We all know it — but someone’s got to say it.”

Sears was referring to a summer 2014 meeting between city officials and Speer Burdette, president of the Callaway Foundation. In the meeting, Burdette reportedly told officials the Callaway family — which owns the land through a trust — was willing to donate the right of way for the road, and the foundation would put $2 million toward the estimated $4.5 million construction. In June 2014, Mayor Jim Thornton and late City Manager Tom Hall sent Burdette a letter supporting the proposal, saying it would “enhance functionality of the entire transportation system.”

Sears contends the foundation wants to use SPLOST dollars to supplement the road’s construction so the land — more than 1,600 acres, including a lake — can be opened up and sold by the Callaway Land Trust for a private housing development. Burdette told the Daily News there are no plans at this time for such a development, but did say it’s possibly in the future. He also balked at the idea the foundation would attempt to usurp public funds for private gain.

“I resent anyone saying there’s anything unethical about this,” Burdette said. “We have no personal benefit from the things we do. Every single grant we make is approved by the foundation’s Atlanta attorneys and is 100 percent legal.”

For his part, Sears said the road’s plans simply don’t add up. He referenced four points city and county officials have used to justify the road: that it would ease traffic on Vernon Road, provide quicker access to WellStar West Georgia Medical Center, mitigate railroad crossings and provide better connectivity to Interstate 85.

“How much money do we want to spend for the people of the country club area to get to the hospital 90 seconds quicker?” he asked Council. He said the justifications were “bogus” and that “you can only conclude one thing — we’ve all been misled.”

The proposed road has been in the works since the 1960s, and a similar recommendation was made in a 2006 Multimodal Transportation Study of the county, although the route doesn’t exactly match the proposed Northwest Connector. Rather, it wraps further north and west, spans West Point Lake and more closely matches the existing bypass system. That plan was scrapped because of costs associated with building a highway-style bridge over the lake, county officials have previously said.

The next commission work session is scheduled for Friday at 9 a.m. at the Troup County Government Center, 100 Ridley Ave.