Seniors in Young Singers prepare for their final show 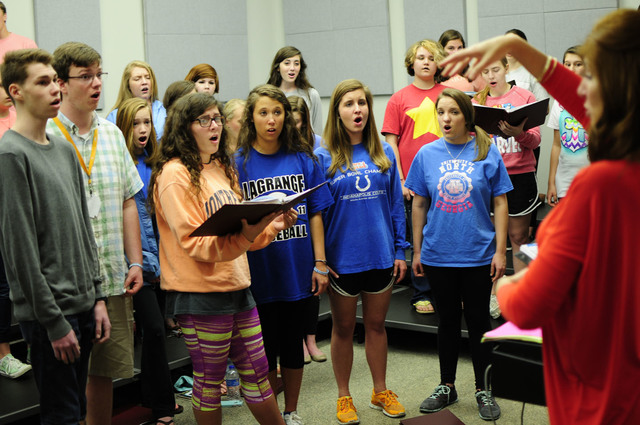 LaGRANGE — As artistic director Stacey Hardigree leads the teens in the Young Singers of West Georgia group Monday, at the forefront stand several high school singers practicing for what will be their last show.

The seniors range in how long they’ve been with the Young Singers, but they will all end their time Sunday, when they perform the show Melting Pot of American Music for a crowd at New Community Church.

For Marshall Todd, who has been with the group since the second grade, his role in the singers will have a long-lasting impact.

“For almost as long as I can remember, I’ve been with this choir,” he said. “I’ve kind of grown up with it … I think out of everything I’ve been involved in, throughout my whole life up until this point, this has probably been the most influential.”

In addition to helping him develop “great music skills,” he said the experience imparted “intangible qualities, like show up on time, do your part, be part of a greater ensemble — fill your role in a large group.”

He plans to continue in music by auditioning for the 50-person chamber choir at Georgia Tech, which he will attend in fall.

Jacob Shelton had three years’ experience on the LaGrange High School chorus when he joined the Young Singers two years ago. He felt it would be “something fun.”

“I just like the atmosphere, I enjoy being by all my friends,” he said. “I enjoy music, music catches my attention — everything. I like the feeling.”

He plans to attend West Georgia Technical College in the fall then later transfer to LaGrange College to major in music and graphic design.

Leighton Parker returned to the Young Singers as a freshman in high school after she was involved for a few years in elementary school.

She has enjoyed “being exposed to all different kinds of music and express myself in ways I didn’t know I could before, through the music and performing.”

She also was thankful for the friends she made and her experiences along the way, especially after a personal tragedy.

“When my dad passed away earlier this year, just the feeling of home and love that everybody showed me, and the support and strength that they’ve shown me,” she said of how the group has impacted her.

She also was grateful for her tutelage under Hardigree, “because she is so amazing in what she does and what she brings to this group, and just being around her.”

Bethany Duquette has been with the group since her freshman year.

“I love the quality of what we do,” she said. “… You learn a lot about technique, and it’s very much like a community. We’re all in there together and it’s great when we get to that final product as well. We work hard for that final product. I’m pretty excited for (the concert) Sunday — kind of sad, though.”

She will miss the guidance of Hardigree and her adherence to quality the most. Duquette said being part of the group has allowed her to have a lot of experience already under her belt that she can apply to her college life.

Jenna Conrad has been involved since middle school.

She and Duquette both mentioned one rehearsal where all the singers started to cry during a song that moved them all emotionally.

“One thing about the Young Singers … we’re all from different schools, different ages, but it all brings everybody together,” Conrad said, adding she hopes more people will take advantage of what the group has to offer.

Mackenzie Skinner said she has “learned a lot about music. More than that, I’ve learned about teamwork and developing strong relationships. It’s part of me, who I am.”

She most enjoys the quality of the group and the heart all the participants put into it.

“We have a good group, it makes it like family,” she said. “I just enjoy doing it.”

Hardigree said this year’s crop of seniors will be hard to replace, especially as mentors to the younger students.

“Just to watch them grow musically is just … they’re just a child, then all of a sudden, they become so professional, and by the time they reach high school, they’re just ready to be on the stage, just ready to lead the pack,” she said.

The artistic director hoped people will come out to see the seniors’ final show.

“I’d love to see our community there to learn more about us and see what these kids dedicate their whole childhood to learn this art and do it well,” Hardigree said. Tickets for Melting Pot of American Music may be purchased at lsparts.org. Anyone seeking more information may contact the Lafayette Society for Performing Arts at 706-882-9909.