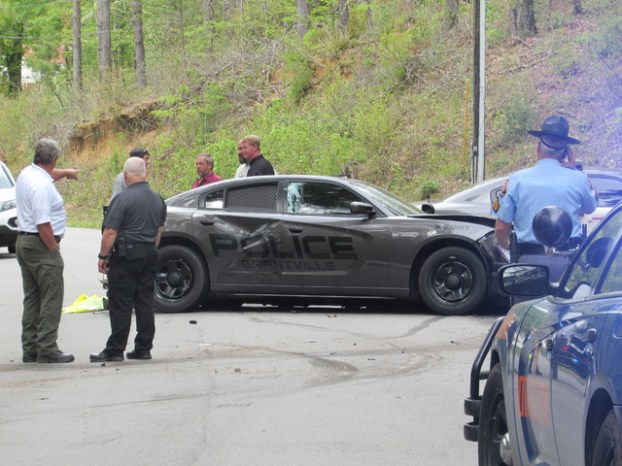 Monday, Grantville Police Officer William Faulkner was cited during a wreck on Lincoln Street in Hogansville that occurred during a high speed chase. Four people, including Faulkner, were hurt.

http://lagrangenews.com/wp-content/uploads/sites/37/2016/04/web1_ChaseFolo1.jpgMonday, Grantville Police Officer William Faulkner was cited during a wreck on Lincoln Street in Hogansville that occurred during a high speed chase. Four people, including Faulkner, were hurt.

The driver of a blue Volkswagen Jetta SE was being pursued by deputies with the Coweta County Sheriff’s Office and two patrol vehicles with the Grantville Police Department, Walker said.

It was still unavailable as of press time Wednesday why the Jetta was being chased.

The car and law enforcement vehicles got off at the Hogansville exit, headed down towards Main Street and took a right onto Lincoln Street, Walker said.

The driver in the Jetta started to pass other cars and swerve into oncoming traffic in an attempt to elude police, Walker stated. The driver in a city of Hogansville work truck was almost hit by the Jetta and pulled over onto the shoulder of Lincoln Street near the bottom of the hill.

As the first Grantville police car came over the top of the hill, the officer hit his brakes in an attempt to slow down. The officer in the second Grantville Police car was directly behind him and could not stop in time, Walker said.

The officer steered his car to the left as he came down the hill, hit the city of Hogansville truck and a Toyota Corolla in the opposite lane of traffic, according to Walker. The patrol car then rotated back across Lincoln Street and smashed into an older model Toyota pickup truck before coming to a stop.

Walker said the officer in the first Grantville police car stopped the pursuit and checked on people at the crash scene.

Four people were hurt in that accident, including Officer William Faulkner with the Grantville Police Department, the driver of the city of Hogansville truck, and the driver and passenger in the Toyota truck, Walker said.

All of them were transported by ambulance to area hospitals with non life-threatening injuries.

Faulkner was cited as the “main contributing factor in the crash,” Walker said, because he was going too fast.

Calls from the Daily News to the Grantville Police Department were not returned Tuesday.

The driver of the Jetta continued at high speed down Lincoln Street and was still being pursued by deputies with the Coweta County Sheriff’s Office, added Walker.

The driver, identified as Kendrick Lee Campbell, 28, of Rex, attempted to turn left onto Askew Avenue, but ran into the side of a Ford F-150 truck, Walker said.

According to witnesses at the second crash scene, Campbell jumped out of the car and tried to run away, but was tackled by the driver of the Ford F-150 until deputies could take him into custody.

Walker said Campbell had a minor leg injury but was immediately arrested.

He said law enforcement officials learned Campbell had warrants out for his arrest, and suspected drugs and drug paraphernalia inside the car, which was rented.

Two female passengers, who have still not been identified, were also arrested after deputies found drugs on them, Walker stated.

All three were booked into the Coweta County Jail.

Their charges are not yet known. Calls to the jail were not returned Wednesday morning.

The incident is the third chase to end in a wreck in Hogansville since Wednesday.