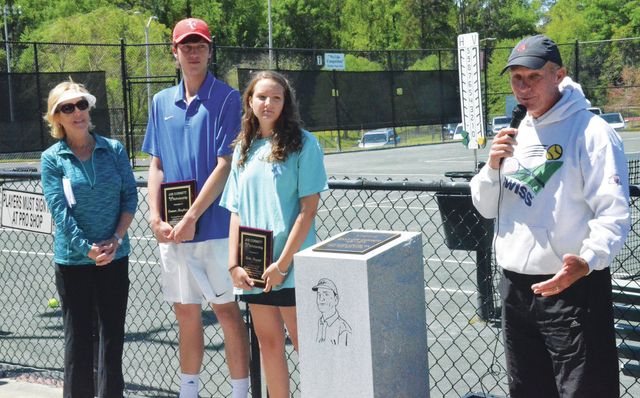 LaGrange High’s Connor Mahan and Katie Bryant are this year’s recipients of a scholarship given in memory of Joe Cornett, a local tennis enthusiast who died in 2012. With Mahan and Bryant are Joe Cornett’s wife, Michelle Cornett, along with other members of the family and McCluskey Tennis Center head pro Bill Champion. Kevin Eckleberry | Daily News

http://lagrangenews.com/wp-content/uploads/sites/37/2016/04/web1_tennis1.jpgLaGrange High’s Connor Mahan and Katie Bryant are this year’s recipients of a scholarship given in memory of Joe Cornett, a local tennis enthusiast who died in 2012. With Mahan and Bryant are Joe Cornett’s wife, Michelle Cornett, along with other members of the family and McCluskey Tennis Center head pro Bill Champion. Kevin Eckleberry | Daily News

LAGRANGE – For a pair of tennis players who have spent so much of their lives at McCluskey Tennis Center, it was a special moment.

For the past four years, the Cornett Classic tournament has been held at the McCluskey Tennis Center, and the event is named in honor of Joe Cornett, a local tennis enthusiast who died in 2012.

During each of the years the tournament has been held, a scholarship given in memory of Cornett has been presented to one or more local tennis players.

This year there were two local players who received the scholarship, Katie Bryant and Connor Mahan, who are both seniors at LaGrange High.

The scholarship announcements were made on Saturday at the tennis center, and Joe Cornett’s wife Michelle Cornett and other members of the family were on hand for the ceremony.

“That means a whole lot,” Mahan said. “This is kind of been almost like a family to me since I was very young. I started young, and I’ve known these people almost my whole life. It really means a lot for them to give me this award. It’s a big deal.”

Bryant, like Mahan, has made McCluskey Tennis Center almost a second home over the years, and she said “it was really special” to receive the scholarship.

Bryant and Mahan have both been key members of the LaGrange tennis program since they arrived as freshmen.

Unfortunately for Bryant, she has been unable to play this year because of an injury that required surgery.

Bryant has still been a part of the team, even if she can’t get out on the court and play.

“I try to come to all of the practices,” she said. “The away matches have been tough, with all my AP classes and stuff. It’s kind of been sad, just not being able to play, and it being my last year.”

David Traylor, an assistant coach on the LaGrange team, said Bryant has done a superb job of dealing with a difficult situation.

“This year, she had to have surgery, and has been unable to play with the team, and it was a huge disappointment, but she has handled it like a champion,” Traylor said. “I’m sure she’ll handle all of life’s obstacles in the same way.”

Traylor said Bryant, who’ll be attending Auburn University, earned the scholarship because of her accomplishments on and off the tennis court.

“She comes from a great family. She’s a wonderful person, and she’s also a pretty good tennis player,” Traylor said. “The best thing about this young lady is, she’s a good tennis player, but she is a much better person. I’ve been honored to work with her for four years. It’s been a pleasure.”

Mahan, who plans on going to the University of Georgia, has enjoyed a strong senior season for the Grangers.

He has been the number one singles player for a team that has had a successful season and will be one of the favorites to win the Region 1-AAAAA tournament.

Mahan has been focused on more than just his own game, though.

Mahan has been serving at McCluskey Tennis Center as an instructor, and he has been working with young players.

Stephen Vincent, an instructor at the tennis center, was looking for someone who he felt would be an ideal fit to help build the youth program, and he targeted Mahan.

“I challenged him about a year ago,” Vincent said. “I said look, Bill (Champion) has come to me and he really wants me to improve our junior numbers. We have a great junior program, but we want to see it get bigger, because we’re surrounded by these other big tennis communities. So I came to Connor with a challenge. I said Connor, it’s your senior year, let’s go out on a legacy. I want you to help me build this junior program.”

Mahan readily accepted, and he has gotten a lot of fullfillment out of being a teacher.

“Most of my tennis career, I’d been committed to bettering my own skills, trying to see if I wanted to play college tennis perhaps,” Mahan said. “Especially this senior year, and maybe toward the end of my junior year, I realized that I might as well use the skills I’ve gained to help others. I really started working with Stephen and doing some private lessons here or there. That really felt good.”

As for his senior season, it has been a good one, although he and his teammates have fallen just short in their two meetings with rival Columbus.

LaGrange and Columbus could be headed for a rematch in the region-championship match.

“Hopefully the third time’s the charm, and we can keep on going,” Mahan said. “That’s the plan.”

Champion, who is the head professional at the tennis center, said Mahan and Bryant are great examples of the types of “young people we have here. Hats off to the families. That’s where it starts. We’re blessed to have a role in hanging out with them.”

As for the Cornett tournament, it was a success, with more than 100 players participating.

Vincent said the most encouraging thing was seeing so many youth players taking part in the tournament.

“Our junior turnout for this tournament is really unbelievable,” Vincent said. “We have seen a really big boom in our junior program in the last few years.”