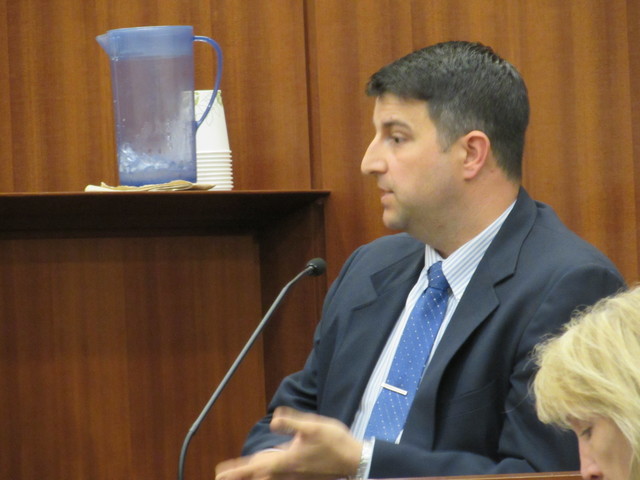 LaGrange Police Detective Jason Duncan reads text messages to the jury that were allegedly written between the defendant, Celestino “Hector” Acuña-Martinez, and the 11-year-old victim.

http://lagrangenews.com/wp-content/uploads/sites/37/2016/04/web1_20160413_160328.jpgLaGrange Police Detective Jason Duncan reads text messages to the jury that were allegedly written between the defendant, Celestino “Hector” Acuña-Martinez, and the 11-year-old victim.

LaGRANGE — Day two of the trial against accused child molester Celestino “Hector” Acuña-Martinez, 41, started Wednesday morning with video testimony from the victims, 9 and 11 years old, plus alleged witnesses to the crime.

The little girl told a counselor at the Troup County Child Advocacy Center via recorded video interview the abuse had occurred the day before the exam took place, March 13, 2015.

Cooley also stated she did notice some unusual findings in the 11-year-old victim as well.

But Martinez’ defense attorney, Julianne Lynn, was not satisfied with the nurse’s explanation of how she determined the girls had been sexually assaulted, specifically since Cooley knew about the case ahead of the examinations.

“Take the 9 year old’s history out of the equation. Just look at the physical evidence. Does it show abuse?” Lynn asked Cooley.

“No,” she admitted. “But that’s why we take a medical history … she could’ve fallen straddling a tub … everything depends on that history. What that child tells us.”

LaGrange Police Detective Jason Duncan stated he collected two bedroom comforters and clothing, and took swabs from areas inside the house to be tested at the Georgia Bureau of Investigation crime lab. He said no evidence of male DNA was found on the items or the 9-year-old victim during her physical exam.

The detective testified data extracted from Martinez’ cellphone showed searches to pornographic material and a website with titles that sounded like child pornography.

Lynn asked the detective if he knew what was on those sites Martinez allegedly visited. He admitted he did not.

Duncan stated Martinez’ cellphone also showed several calls between the defendant and the 11-year-old victim, plus text messages. He read the messages out loud to the jury. None of them contained any inappropriate language or context.

Media and others not directly involved in the case were barred from the courtroom when both victims and two children allegedly present during some of the abuse testified.

The state rested its case Wednesday.

The defense was expected begin its case Thursday morning.