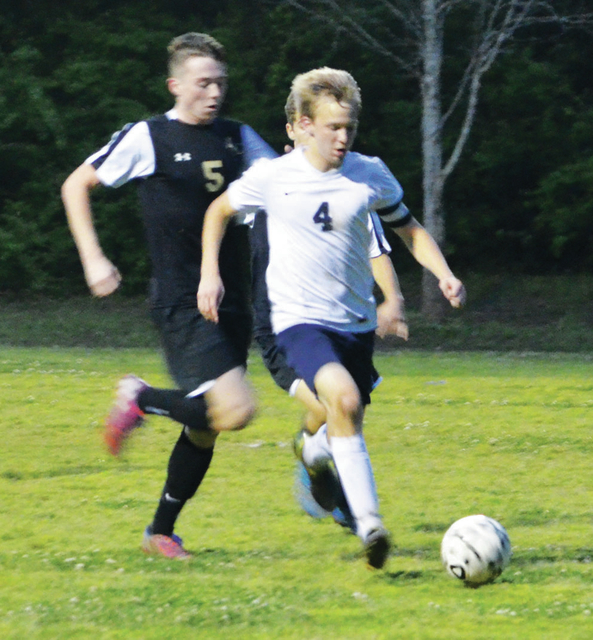 Troup’s Chistian DeLeon controls the ball during the second half of Wednesday’s game against Fayette County. Kevin Eckleberry | Daily News

http://lagrangenews.com/wp-content/uploads/sites/37/2016/04/web1_soccer2-1.jpgTroup’s Chistian DeLeon controls the ball during the second half of Wednesday’s game against Fayette County. Kevin Eckleberry | Daily News

LAGRANGE – History, unfortunately for the Troup Tigers, repeated itself on Wednesday night.

A year ago, Troup’s boys’ soccer team headed into its game with Fayette County needing a victory to advance to the state playoffs, and it fell short.

Flash forward a year, and once again it was Troup and Fayette County meeting to see who the fourth and final playoff team from Region 5-AAAA would be.

Troup was the home team for this year’s game, which was played at the Troup County Soccer Complex.

Fayette County surged to a 3-0 halftime lead, and it withstood a second-half charge from Troup to claim a 4-2 victory.

Fayette County is playoff-bound, while Troup’s season will end after it plays three more regular-season games.

“We hate it for the seniors,” Troup coach Jase Crenshaw said. “It’s the same as last year. Win and you’re in, and if you don’t win, you’re not.”

The game got off to a rocky start for the Tigers when they accidentally kicked the ball into their net for an own goal.

Fayette County went on to score two goals of their own to build the 3-0 halftime lead.

The Tigers had their chances in the first half, but they couldn’t convert.

“We had some excellent opportunities inside the 18, and we couldn’t (score),” Crenshaw said. “They had a heck of a keeper.”

The Tigers came to life in the second half.

They controlled the action, had numerous scoring chances and scored two goals.

Alan Vazquez scored Troup’s first goal on an assist from Matthew Hale, and Jimmy Cancino scored a short time later to make it a 3-2 game.

Fayette County added an insurance goal to push the lead to 4-2, and that’s the way it ended.

With its playoff hopes dashed, Troup will look to finish the season on an upnote.

Troup still has a chance to win the county championship with a win over Callaway on Monday.

“We’ve got Whitewater, Callaway and Harris County for senior night,” Hembree said. “We still have some things to play for. We’ll give it everything we’ve got.”

Troup’s teams will play their region finales on Friday at Whitewater.