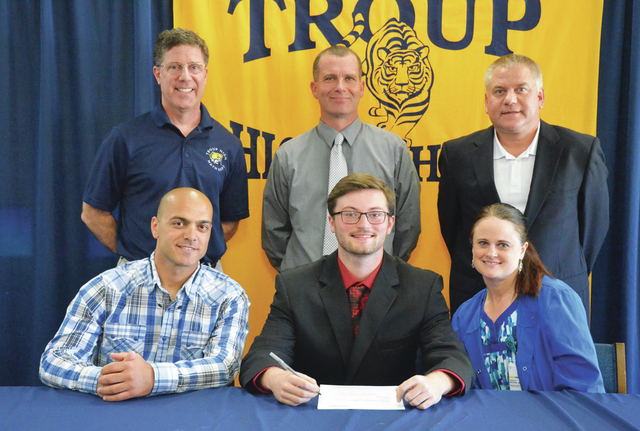 Mike Hardy was a two-sport star at LaGrange, excelling in football and basketball. Contributed photo

http://lagrangenews.com/wp-content/uploads/sites/37/2016/04/web1_hardy3.jpgMike Hardy was a two-sport star at LaGrange, excelling in football and basketball. Contributed photo

LaGrange’s Mike Hardy and Derieko Smith were teammates in football and basketball, and they signed on the same day this week. Contributed photo

http://lagrangenews.com/wp-content/uploads/sites/37/2016/04/web1_signing3.jpgLaGrange’s Mike Hardy and Derieko Smith were teammates in football and basketball, and they signed on the same day this week. Contributed photo

LAGRANGE – Mike Hardy was in the LaGrange High gymnasium on a February morning watching as more than 10 of his teammates on the football team signed their letters of intent.

Hardy knew he wanted to play a sport in college, but he wasn’t prepared to make that decision by the time national signing day rolled around in February.

Hardy wasn’t ready in March, either, and the search for the right college fit continued into April.

This week, the search finally ended.

Hardy, who was a play-making wide receiver for the Grangers, has signed a letter of intent to play football at Clark Atlanta University.

Hardy was joined by many of his teammates in football and basketball, along with other friends, family members and coaches, during his signing ceremony in the LaGrange High media center.

Hardy was glad to have the recruiting process over with.

“You get so many questions like where are you going, and what are your final choices,” Hardy said. “It’s a real relief.”

“There were times when I didn’t see myself as a college football player,” Hardy said. “Coach (Dialleo) Burks helped me get recruited, and we finally got it done.”

Hardy will have plenty of familiar faces at Clark Atlanta.

Three of his teammates at LaGrange, Jeremiah Wright, Kimani Barnes and Undriel Copeland, signed with Clark in February.

A pair of Callaway players, Javoski Leverette and Cortney Laye, are also headed to Clark.

Hardy is grateful to know there will be some familiar faces as he makes the transition to college football.

“That’ll definitely help me stay comfortable,” Hardy said. “I’ll have somebody I’m familiar with. We spend a lot of time together.”

Hardy had an outstanding senior season on the football field catching passes from quarterback LaPerion Perry.

The 6-foot-3 Hardy had the speed to run away from opposing defenders, and the size, strength, and determination to snatch the ball away from a defensive back when he was covered.

When football season ended, Hardy made the transition to the basketball court, and he helped lead the Grangers to a second straight region championship and a spot in the second round of the state tournament.

Hardy hit one of the biggest shots of the season.

In a late-season game against Northside, Hardy got an offensive rebound and scored with seconds left in overtime.

He made a free throw to complete a three-point play, and LaGrange won 71-68 to secured the top seed and home-court advantage for the region tournament, which it won.

Hardy also made a buzzer-beater during the semifinals of the 2015 region tournament against Northside, and LaGrange won the title the following day.

“Mike had to compete his sophomore year and junior year for playing time, and he had to compete this year,” Veal said. “I thought he had a fantastic senior year. I really thought in practice he had some leadership qualities to him, and on the court. In some ways, he was like a point-forward for us. I really thought Mike came on strong. I was really pleased with his senior year.”