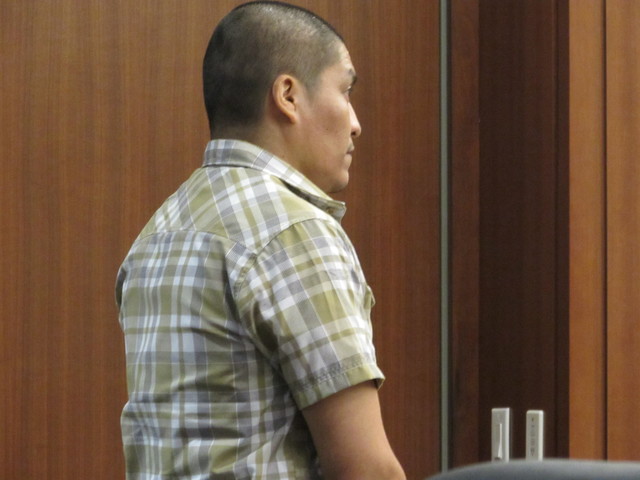 Celestino Hector Acuno-Martinez, 41, stands in a Troup County Superior Courtroom Friday morning as the jury foreman tells the court the group is ‘hopelessly deadlocked’ on a unanimous verdict on all 12 counts against him.

http://lagrangenews.com/wp-content/uploads/sites/37/2016/04/web1_Martinez.jpgCelestino Hector Acuno-Martinez, 41, stands in a Troup County Superior Courtroom Friday morning as the jury foreman tells the court the group is ‘hopelessly deadlocked’ on a unanimous verdict on all 12 counts against him.

LaGRANGE — A man accused of molesting and raping two young girls will have to wait another month to learn if he will be a free man — or spend part of his life behind bars.

The jury foreman told Sakrison they were hopelessly deadlocked on all 12 counts against Martinez. The foreman sent a note out to the judge after only deliberating an hour and a half Friday morning.

The jury received the case against Martinez Thursday afternoon. Three hours into deliberations, they sent out a note stating they were deadlocked.

Sakrison again charged the jury and asked them to go back into the room and discuss the case further. But by 5:30 p.m., the foreman stated the group was still at an impasse with an unanimous verdict on all 12 counts against Martinez.

The judge wanted them to continue deliberations and asked them to come back Friday morning. But the overnight reprieve still did not help jurors come to an agreement.

“When you say you are in a position of not being in agreement, without telling me which group is guilty or not guilty, how do the jurors break down,” Sakrison asked the foreman.

“Eight to four,” the foreman replied.

Sakrison sent the group back into the jury room.

“I feel like we’re going in circles at this point, your honor,” said Martinez’ defense attorney, Julianne Lynn. “We are in the same position we were in yesterday at 4 p.m., and it is almost 11 a.m. now (Friday). I think we need to start thinking about declaring a mistrial.”

In the end, Sakrison agreed based the jurors’ inability to reach an agreement on any of the counts on the indictment.

“We are proud that the jurors worked hard and appreciate their confidence in my client,” stated Lynn via text message. “We look forward to a ‘not guilty’ verdict in the future.”

The Daily News also reached out to Senior District Attorney Lynda Caldwell, who prosecuted the case against Martinez, but did not hear back as of press time.

According to the indictment, the alleged incidents took place in a home in LaGrange between August 2013 and March 2015 with two girls aged 9 and 11 years old.

The girls testified about the sexual abuse through a videotaped interview and before the jury, as did two other children who claimed they witnessed some of the alleged incidents.

But a sexual assault nurse practitioner who examined the girls told the jury without her direct knowledge of the alleged abuse, there was no physical evidence on either victim that would lead her to think they had been assaulted.

There was also no male DNA found on comforters, clothing or on swabs taken from different areas throughout the house, stated LaGrange Police Detective Jason Duncan.

The detective testified data extracted from Martinez’ cellphone showed searches to pornographic material and a website with titles that sounded like child pornography, but could not confirm on the stand that they were child pornography.

A new trial date for Martinez has tentatively been set for May 23.