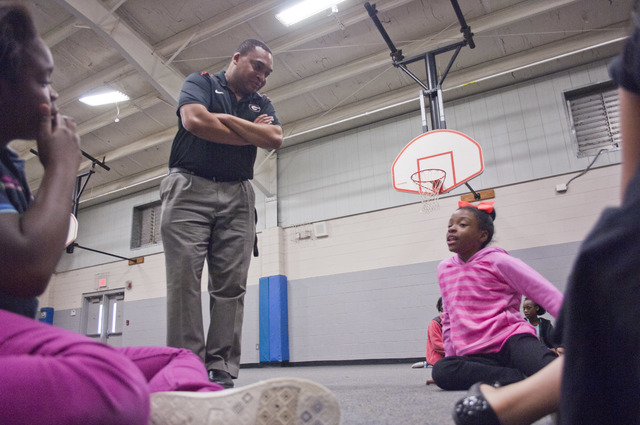 Mekos Denson, new director of the Boys and Girls Club of West Georgia, speaks with club members at the former Cannon Street school Friday afternoon. Denson, a 16-year veteran of Boys and Girls clubs, took the reigns two weeks ago.

http://lagrangenews.com/wp-content/uploads/sites/37/2016/04/web1_BoysAndGirlsClubWEB.jpgMekos Denson, new director of the Boys and Girls Club of West Georgia, speaks with club members at the former Cannon Street school Friday afternoon. Denson, a 16-year veteran of Boys and Girls clubs, took the reigns two weeks ago.

LaGRANGE — Mekos Denson know what it takes to run an after-school program for kids.

As the new director of the Boys and Girls Club of West Georgia, Denson, 34, replaced Bart McFadden two weeks ago. McFadden left the West Georgia chapter after he accepted another club director position in Tennessee.

Denson is still settling in, but he already has big plans for the club, which serves 600 youngsters ages 6 to 18 at three different locations in the area.

“I inherited a great situation,” said Denson, who has worked with Boys and Girls clubs for 16 years. “Bart did a great job establishing a foundation. Everyone’s been nice and helpful, and I’ve met a large group of people — everyone from kids to parents to community leaders and politicians.”

Denson, an Ohio native, was raised by a single parent and grew up in Boys and Girls Clubs, he said. The club had a major impact in his life.

“The club filled a void for me,” he said. “Boys and Girls Club is the ultimate platform to help kids, and I always felt like I needed to give back.”

Although he’s grateful for all the hard work that was done by his predecessor, Denson said he’s ready to take the club to the next level and plans to double enrollment to 1,200 kids. The club is also planning to open a new branch at Callaway Middle School and recruit new members through upcoming summer camp programs, he said.

The club already has partnerships with the Troup County School System, the LaGrange Housing Authority and local law enforcement, and Denson hopes to forge more relationships with other groups, including churches. It takes about $650,000 each year to operate the Boys and Girls Club of West Georgia, which has locations in the former Cannon Street School, Hogansville Elementary School and Valley, Alabama.

“We encourage folks to be open minded and look for creative ways to partner with us,” he said.

He’s hoping to bring in new corporate sponsors, as well as encourage individuals to make financial donations. Currently, the club’s largest financial backer is the United Way of West Georgia, he said.

Wearing a multitude of hats is part of Denson’s 60 to 70 hour a week job, he said, but at the end of every day, it’s the kids that matter most. He’s already keenly aware of the challenges facing the community, including teenage delinquency and gang violence, and said he’s aiming to ram up efforts to give kids a positive place to keep them out of trouble.

“We’re looking at ways to extend our hours, and we’re also working on a partnership with DJJ (the Georgia Department of Juvenile Justice) to keep kids out of gangs,” he said.

Walking the hallways of the former Cannon Street school where the club’s central office is located, Denson looks at home as he high fives kids and tells them not to run in the hallways. Some of the kids are still getting to know him — they’re not quite sure who he is yet, but after the right amount of time, he’s committed to making his mark.