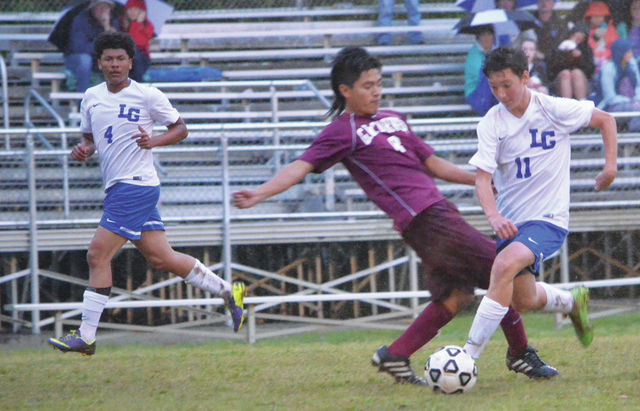 With the rain coming down, LaGrange’s Winston Herrera keeps the ball away from a Carver player. Kevin Eckleberry | Daily News

http://lagrangenews.com/wp-content/uploads/sites/37/2016/04/web1_soccer6.jpgWith the rain coming down, LaGrange’s Winston Herrera keeps the ball away from a Carver player. Kevin Eckleberry | Daily News

LaGrange’s Eva Hutton controls the ball during the first half of Friday’s win over Carver. Kevin Eckleberry | Daily News

http://lagrangenews.com/wp-content/uploads/sites/37/2016/04/web1_soccer2-2.jpgLaGrange’s Eva Hutton controls the ball during the first half of Friday’s win over Carver. Kevin Eckleberry | Daily News

LAGRANGE – In a game they had to have to keep their playoff hopes alive, the LaGrange Grangers were able to outlast a pesky Carver team Friday night.

On a drizzly evening at Gardner Newman Middle School, LaGrange scored two goals in the second half to capture a 2-0 victory.

It was senior night, and the upperclassmen for both teams were recognized between games.

LaGrange improved to 2-3 in Region 1-AAAAA, and it will wrap up a playoff spot with a home win over Hardaway on Wednesday.

The Grangers had plenty of scoring opportunities in the first half of Friday’s game, but they were unable to find the net.

In the second half, Harrison Hunnicutt and Yeison Diaz each scored for LaGrange, and those two goals were enough.

“It’s growing pains,” LaGrange head coach Keita Placide said. “When you’re dealing with a young team and you’re trying to coach them, and have them understand the game, it’s tough.”

It’s now in essence a one-game season for the Grangers, who have beaten Harris County and Carver in the region while falling to Columbus, Northside and Shaw.

In Friday’s girls’ game, LaGrange broke open a close game in the second half to roll to a 7-0 win.

Carver hung tough with LaGrange in the first half, and it was a 2-0 game after the first 40 minutes.

In the second half, the Lady Grangers found the net a lot more often, and they were able to pull away for the win.

The Lady Grangers are 3-2 in the region, and they know they’ll be in the playoffs, it’s just a matter of where they’ll be seeded.

LaGrange still has an outside chance of finishing second and hosting a state-tournament game, but it will most likely be the third seed.

LaGrange’s overtime loss to Northside in its second region game will likely keep it from finishing second.

Patton made a penalty kick with just four seconds left in the first half to give the Grangers a 2-0 lead, and they carried that momentum over into the second half.

LaGrange, which has been fighting the injury bug, was coming off a tough 9-0 loss to a strong Whitewater team earlier in the week.

“This was a nice bounce-back game for us after Whitewater,” LaGrange coach Andy Fritchley said. “That was really tough. We ended up only having 12 players for that game, and that’s with calling somebody up.”

LaGrange will look to finish its region schedule with a win over Hardaway on Wednesday, and it can win the county championship with a road victory over Callaway on Friday.

CALLAWAY: The Lady Cavaliers lost a 5-4 heartbreaker to Central-Carroll on Thursday in a Region 5-AAA game.

In Thursday’s boys’ game, it was Central-Carroll winning 2-0.

Callaway’s teams finish the regular season next week with region games against Pepperell, and a county showdown against LaGrange.