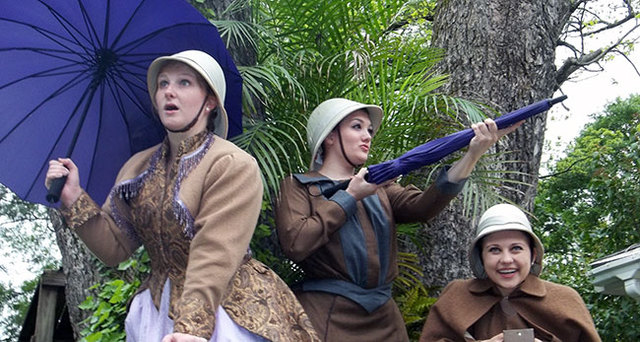 Nikki Stone, Lizzie Clements and Meagan Thompson portray intrepid explorers in LaGrange College’s production of ‘On the Verge; Or the Geography of Yearning.’ The show opens Thursday at Price Theater.

http://lagrangenews.com/wp-content/uploads/sites/37/2016/04/web1_on-the-verge-real.jpgNikki Stone, Lizzie Clements and Meagan Thompson portray intrepid explorers in LaGrange College’s production of ‘On the Verge; Or the Geography of Yearning.’ The show opens Thursday at Price Theater.

LaGRANGE — In 1888, three female explorers bravely set out on a journey to explore new territories. Along the way, they encounter a troll, a baby yeti, a cannibal and several other very unusual characters. They also make an astonishing discovery during their travels.

The adventures of these intrepid women lay the groundwork for the comedy “On the Verge; Or the Geography of Yearning,” the latest LaGrange College Theatre production. The show opens Thursday and runs through April 30 at Price Theater.

“This is one of my favorite plays,” said director Kim Barber Knoll, who leads the college’s theatre arts program. “It is intelligent and funny and clever — a theatrical place that celebrates language.”

“It’s witty and entertaining,” she said. “We laugh all the time because we are having so much fun.”

Guest designer James Tolman of Boston said the heart of the play is its script — specifically, the words.

“They are amazing and meaningful and are always pulling the audience forward,” he said.

But the plethora of words came with its own challenges, said junior Lizzy Clements.

“We are using words we’ve never heard before,” she said. “I had 31 pages of research on just the vocabulary.”

Barber Knoll said the play leads to an appreciation of the power and beauty of words.

“In our early research, we came to know the Oxford Dictionary extremely well,” she said. “You won’t find ‘like,’ ‘you know’ or ‘uh’ in the piece. That’s refreshing.”

“I used the word ‘exorbitantly’ in a religion paper the other day,” she said.

With so much focus on dialogue, Stone said good diction is imperative.

“For an actor who has studied diction, it’s a dream come true,” she said. “We have to enunciate and give each word its full voice. Our characters choose these words and it is our job to do right by (playwright) Eric Overmyer. He strategically placed every word exactly where he wanted it in the script.”

The play on words extends even to character names.

“I play Alex Cafuffle,” Thompson said. “Cafuffle means to stir up or cause disorder. Alex is very feisty and adamant about her beliefs, which can lead to some conflict.”

“Cranberry is an appropriate name for Fanny because she is very much a food connoisseur,” Stone said. “I love how everything intertwines.”

Sophomore Caleb Brown plays every other part in the play — eight in all. He said he found bits of himself in every one.

“One is awkward, one raps his lines in rhythm and another is a ladies man,” he said. “Professor Knoll has been a great help in guiding me, and my cast mates have been a big help because we feed off each other and work very well together.”

“They are all very different and larger than life,” she said. “I told him to just go crazy – and he has.”

During the span of the play, the characters travel from 1888 until 1955. A lot of the comedy comes from their reactions to things they see and references they “osmose” along the way.

“Lizzie and I were talking the other day,” said Thompson. “It would be like going to sleep today and waking up in 2087. How strange would that be? But these women take it all in stride. They see it all as a grand adventure.”

Playing strong and inquisitive women has been a joy, Clements said.

Designer Tolman said working on this production has been a delight.

“The set is basically a playground that transforms from one place to the next by the way the actors use it,” he said. “I’ve loved watching them make it come alive. My work has been metamorphosized by the actors, and it is a beautiful thing to see.”

The box office is open weekdays from noon until 4 p.m. Email the box office to make reservations at priceboxoffice@lagrange.edu, or call 706-880-8080. If emailing or calling, please leave name, the performance date/time and number of tickets desired, type of tickets and a call-back number and email address for confirmation.