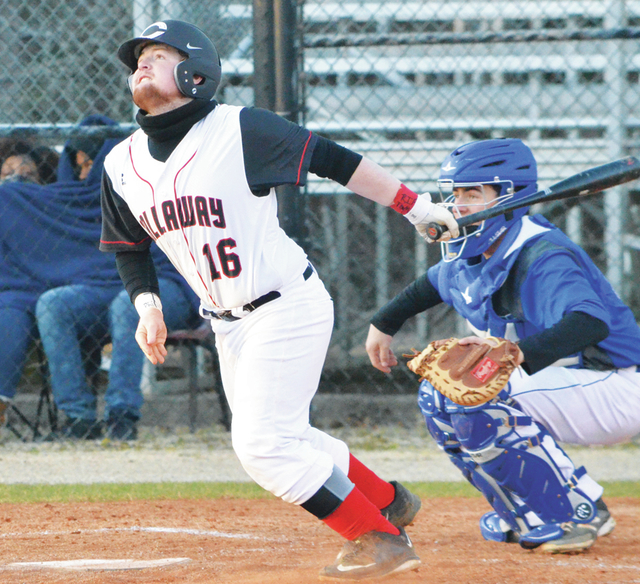 Hunter Rollins hit a two-run home run in the first game of Friday’s doubleheader against Cedartown, and he got the complete-game win in the second game. Kevin Eckleberry | Daily News

http://lagrangenews.com/wp-content/uploads/sites/37/2016/04/web1_CHS-rollins.jpgHunter Rollins hit a two-run home run in the first game of Friday’s doubleheader against Cedartown, and he got the complete-game win in the second game. Kevin Eckleberry | Daily News

CEDARTOWN – The game didn’t mean anything as far as playoff positioning goes.

Whether the Callaway Cavaliers won or lost the second game of Friday’s doubleheader against Cedartown, they were going to be Region 5-AAA’s third-place team.

After dropping the first two games of the series against Cedartown, though, Callaway desperately wanted to get a win to avoid a sweep and finish its region schedule on a winning note.

The Cavaliers made it happen.

After Cedartown won the first game 8-2, Callaway got a complete-game performance from Hunter Rollins on the way to a 3-2 victory.

The Cavaliers finished with an 8-7 region record, and they placed third behind Cedartown (12-3) and Rockmart (10-5), and they’re one game ahead of Central-Carroll (7-8).

Callaway rallied to tie it in the top of the sixth of that first game on a two-run home run by Rollins before Cedartown took control in its half of the inning.

Callaway has been a resilient team this season, and after a 30-minute break between games, it came back out and earned the doubleheader split.

“We’ve found ways to bounce back all year,” Callaway head coach Dusty Hubbard said. “And we challenged them between games, too. We felt like we gave away the first game.”

Rollins was the star of the day.

After hitting the tying home run in the first game, he went the distance in the second game to get the win.

Rollins also had one of team’s six hits in Game 2.

While the Cavaliers were unable to defend their region championship, it has still been a successful season.

The Cavaliers had to replace most of their starters from last year’s team, but they still found a way to finish third in a deep region.

One of the preseason favorites to win the title, Pepperell, didn’t even qualify for the playoffs.

“There are no shabby teams,” Hubbard said. “You have Central-Carroll as the fourth seed with the pitchers they’ve got. There’s going to be some good (playoff) series.”

Callaway finishes its regular season with a road game against Smiths Station today, and it won’t play again until the first round of the playoffs on April 28.

“We’ll get a long rest, and work on some things we need to get accomplished before the playoffs,” Hubbard said.

Tigers one victory away from region title