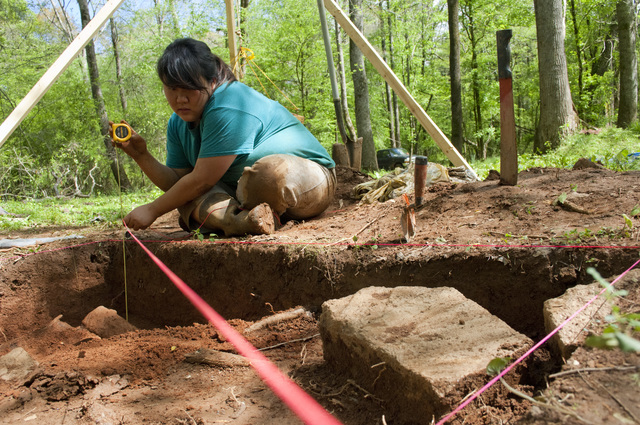 Archaeologist Patrick Severts examples an arrowhead found Saturday during an archaeological dig near the historic Troup Factory on Flat Shoals Creek. Researchers believe the site may have been used thousands of years ago as a settlement or trade route.

http://lagrangenews.com/wp-content/uploads/sites/37/2016/04/web1_Archeology03WEB.jpgArchaeologist Patrick Severts examples an arrowhead found Saturday during an archaeological dig near the historic Troup Factory on Flat Shoals Creek. Researchers believe the site may have been used thousands of years ago as a settlement or trade route.

Archaeologist Patrick Severts, left, points to a location at the historic Troup Factory during an archaeological dig Saturday.

http://lagrangenews.com/wp-content/uploads/sites/37/2016/04/web1_Archeology06WEB.jpgArchaeologist Patrick Severts, left, points to a location at the historic Troup Factory during an archaeological dig Saturday.

Archaeologist Patrick Severts explains the history of the historic Troup Factory, the county’s first textile mill, while standing near the remains of the factory’s dam on Flat Shoals Creek on Saturday.

http://lagrangenews.com/wp-content/uploads/sites/37/2016/04/web1_Archeology07WEB.jpgArchaeologist Patrick Severts explains the history of the historic Troup Factory, the county’s first textile mill, while standing near the remains of the factory’s dam on Flat Shoals Creek on Saturday.

Cynthia Sun, a Kennesaw State University senior studying anthropology, works in an archaeological dig at the remains of the Troup Factory near Flat Shoals Creek on Saturday. Troup Factory was the first textile mill in the county.

http://lagrangenews.com/wp-content/uploads/sites/37/2016/04/web1_Archeology01WEB.jpgCynthia Sun, a Kennesaw State University senior studying anthropology, works in an archaeological dig at the remains of the Troup Factory near Flat Shoals Creek on Saturday. Troup Factory was the first textile mill in the county.

Towering hardwoods and long-leaf pines blot out the sun as wild game roam freely in the shadows below. The underbrush is sparse — not like today. The thick canopy above keeps the birch and thorns at bay.

A herd of deer meander to the banks of a rushing stream as they dodge beams of golden sunlight. The river’s flat shoal provides ample crossing. The deer, one by one, ford the shallow shelf with their young in tow.

It is a time before the written word, before the wheel has rolled its first turn in the Americas, and long before the first European settlers ever laid eyes on Georgia. It is the middle Archaic period, between 8,000 and 5,000 years ago, and the first Americans are on the verge of discovering agriculture, trade and sophisticated tools. It is Eden.

Yards from the river crossing, a small group of hunters crouch silently, readying their spears. In a moment of zeal, a young hunter rears back and thrusts his projectile toward the prey, certain he has the shot.

He misses, the herd flees and the arrow lands on the other bank, lost and buried in the soil for 7,000 years.

‘The first textile mill in the county’

Standing in a square pit Saturday, Terry Powis, an archaeologist from Kennesaw State University, wiped the sweat from his brow as he dug a square-point shovel into the thick Georgia soil.

Exhausted, Powis and his student, KSU senior Greg Smart, shoveled dirt into 10-gallon buckets and hoisted them ground level to Quinn Black, another KSU senior who carefully poured the dirt into a sift searching for evidence of ancient life.

A football field away, another team of archaeologists and students brushed matted mud from a French-style grist stone that Patrick Severts, another archaeologist, explained is the second of two stones — the first has already been removed and sits outside the Troup County Historical Society on LaGrange’s Main Street.

The teams worked in tandem, separated by thousands of years but only a few footsteps as they documented the significance of the first textile mill in Troup County, built here long before the Callaway or Milliken mills.

“It’s a part of Troup County’s history,” Severts said. “If it wasn’t for this site here, I don’t think the textile industry would have taken off in LaGrange. This was key, this was the first textile mill in the county.”

Georgia pioneer Maxey Brooks, who lived from 1796 to 1861, built a grist mill on the site in 1829, a nearby placard says. In 1846, a textile company from Meriwether County built a massive, four-story cotton mill that somehow managed to survive the Civil War and operated until 1902.

But Brooks wasn’t the first person to discover the land — not by a long shot, archaeologists say.

‘How are you going to prove that?’

For thousands of years, the land was likely a route used by Native Americans as they hunted and later may have traded with Georgia’s earliest settlers. Wandering deer carved out perfect paths as they migrated, clearing the way for ancient Creek Indians to move about hunting and gathering.

“We’re looking at enough debitage — projectiles, flakes — to indicate a long-term occupation,” Severts said. “You had a perfect water supply, plenty of game in the area, a crossing.”

Archaeologists at the site have found crude arrowheads, pieces of ancient ceramic pottery and even more modern tools, like a hunting knife Severts dates to about 1890.

“We haven’t found it, yet, but we’re hoping to find a trade good, maybe a bead or some kind of iron object,” Severts said.

Such a discovery would be a boon for archaeologists. They’re searching for evidence to back a theory that James Oglethorpe, the founder of Georgia, passed through the spot in 1739 and met a delegation of Creek Indians there. Clark Johnson, the county’s historian, said the fantastical theory may have merit.

Charles W. Corless Jr, who lived on the historic site in the mid-1900s, did extensive research about Oglethorpe’s journey and first proposed the idea.

“Oglethorpe came to this side of what is now the state of Georgia to meet with the Creek Indians somewhere near Columbus,” Johnson said. “His journey described how long it was. Most people have assumed he came straight across the state as you would do now, but Mr. Corless figured that wouldn’t equal the right number of miles.”

Corless proposed that Oglethorpe followed the rivers, jutting north and south as he criss-crossed wild Georgia on his expedition, Johnson explained.

Severts admits he was skeptical when he first heard the theory.

“Hearing that story when I first moved down here, I thought, ‘how are you going to prove that?’” he said. “Then we start finding these late Mississippian ceramics down here and I thought, “We’re onto something.’ They’re normally associated with pretty large villages.”

Still, Severts and his team of archaeologists can’t prove it just yet. More work needs to be done, but he has a plan for that.

In north Georgia, archaeologists have succeeded in claiming part of the Etowah Valley as a historic, archaeological district.

“That means that an archaeological district becomes fairly sensitive,” Severts explained. “By promoting it as a district, that doesn’t mean things like development can’t happen, but we’re recognizing it as an important area for research in the state of Georgia. Districts are fairly rare, there are not that many in the state.”

Severts is hoping the Troup Factory can earn such a distinction.

“It’s important because one of the things we’re trying to prove here is the value of this location, and try to show that we have evidence to make this an archaeological district,” he said.

Powis, the KSU professor digging in the nearby pit, supports the notion, and said the area is not only an important part of Georgia’s history, but a learning lab for budding archaeologists.

“It’s a great place to have students come out and get more training, more experience in archaeological field techniques,” Powis said. “Where I work in Cartersville, it’s a plowed field, so the soil is all mixed. The vertical integrity, as we call it, is gone. But here, there isn’t that. Once we get below the 1827 mark, it’s all intact.”

The land at Troup Factory, he explained, has never been plowed.

“That’s what attracted me,” said Powis, who has done archaeological research all over the world. “You have the mill here, so you have a really good understanding of the historic period in this part of the county, but Patrick (Severts) found the pre-historic site, and it’s nice to sort of come check that out, just to see how far back in time, to see we have this very long cultural history here at this particular location.”

The 950 acres that comprise the Troup Factory’s original plat were purchased by Corless, the man who proposed the Oglethorpe theory, in the early 1900s. His descendants still own the land, although it’s been parceled up through the generations. Severts married into the family, and he said he plans to share the land’s history and prominence with the community.

“My intention is to open up this trail to the locals — school groups and things like that — and run tours, because it’s a part of Troup County’s history,” he said. “The more interest I get in the site, and the more I get the community behind it, the better the understanding of history is going to be.”