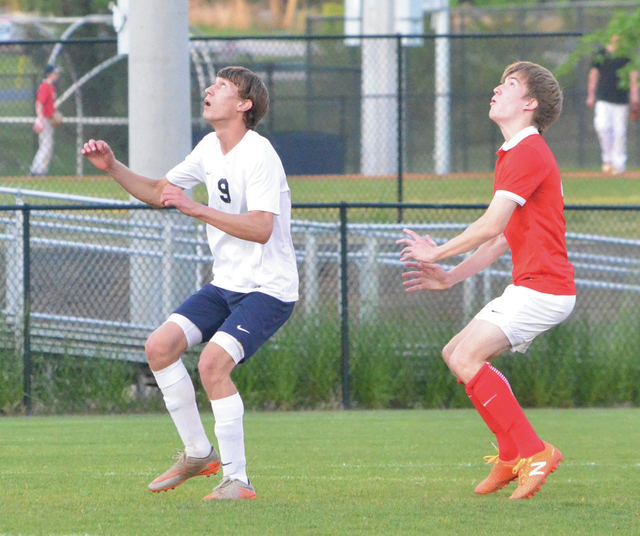 Troup’s Juan Herrera and Callaway’s Alex Shea fight for the ball in the first half of Monday’s game in West Point. Herrera scored one of his team’s goals in a 5-0 win. Kevin Eckleberry | Daily News

http://lagrangenews.com/wp-content/uploads/sites/37/2016/04/web1_soccer7.jpgTroup’s Juan Herrera and Callaway’s Alex Shea fight for the ball in the first half of Monday’s game in West Point. Herrera scored one of his team’s goals in a 5-0 win. Kevin Eckleberry | Daily News

Troup’s Hoston Fannings scored on a header in the second half to cap the scoring. Kevin Eckleberry | Daily News

http://lagrangenews.com/wp-content/uploads/sites/37/2016/04/web1_soccer13.jpgTroup’s Hoston Fannings scored on a header in the second half to cap the scoring. Kevin Eckleberry | Daily News

Callaway’s Cameron Spinks looks for someone to pass the ball to during the second half. Kevin Eckleberry | Daily News

http://lagrangenews.com/wp-content/uploads/sites/37/2016/04/web1_soccer12.jpgCallaway’s Cameron Spinks looks for someone to pass the ball to during the second half. Kevin Eckleberry | Daily News

WEST POINT – With their hopes of making it to the state tournament dashed, the Troup Tigers had to re-adjust their goals.

Troup had three more games to play, and it still had a chance to win the county soccer championship with a victory over Callaway.

On Monday in West Point, Troup took the field for its game against Callaway, and it delivered an inspired performance.

With five different players finding the net, Troup claimed a 5-0 victory that wrapped up the county title.

Earlier this season, Troup got a 4-1 win over the rival LaGrange Grangers.

Troup head coach Jase Crenshaw was gratified to see how well his team played following the disappointment of not qualifying for state.

“You don’t know which team you’re going to see, because there were two directions we could go,” Crenshaw said. “You can hang your head, and not do what you need to do. But thankfully, they came out the way we needed them to tonight.”

After seeing how down the players were following the 4-1 loss to Fayette County, Crenshaw was glad to see them all smiling and enjoying themselves Monday night.

“It’s a good thing for those guys,” Crenshaw said. “We’re not going to state, but there’s a little bit of a silver lining.”

“I’m proud for everyone,” said Herrera, one of the seniors who will able to exit the high-school stage having won a county title. “All of them went 100 percent. Instead of someone going 75 or 50, we all went 100.”

Trotter, another one of the seniors, was excited to beat both of his county foes this spring.

“It’s special, especially since it’s my senior year,” he said. “It’s nice to beat both of my rivals in the same year.”

It was a tough night for Callaway, and head coach Jake Hembree said Troup came out and did what it needed to do.

“They played really well. Troup’s good,” Hembree said. “It’s been fun to watch those guys grow since last summer. They really just played hard, and they definitely wanted it.”

Troup scored what turned out to be the game-winning goal less than 11 minutes into the game when Vazquez powered the ball into the left side of the net, giving his team a 1-0 lead with 29:23 left in the half.

With 17:43 left in the first half, Hale was credited with a goal when a Callaway player touched the ball with his hands at the net.

The officials ruled that ball had crossed the scoring threshold when it was touched, so it was a goal, and Troup led 2-0.

Troup had some more scoring chances throughout the first half.

Jimmy Cancino had a ball hit the post, and Callaway goal keeper Hugo Lopez made a nice save with 6:50 left in the half.

By the time the halftime break came around, it was still a competitive ballgame, with Troup leading 2-0.

Troup padded its lead with 31:13 to play when Herrera delivered a brilliant shot from about 30 yards out.

Herrera angled the ball just over the goal keeper’s head, and it found the net for the goal, and Troup led 3-0.

With 17 minutes to play, it was Trotter scoring on a break-away to make it a 4-0 game.

Fannings, a senior, capped the scoring when he headed the ball into the net with 3:54 to play.

Troup senior goal keeper Matt Moore had a mostly quiet night, but he did make a superb save with less than a minute to play.

Moore left the box, charged, and stopped a ball that almost certainly would have made its way into the net.

It was an all-around outstanding performace by Troup, with every player on the field doing his part.

“I was more than happy with how we played,” Trotter said. “We played amazing. I thought I played one of my best games, and a lot of my other teammates did as well.”

Troup will be back in West Point on Thursday to play Harris County.

Callaway will host Pepperell on Wednesday in its final Region 5-AAA game, and it will be at home to play LaGrange on Friday.