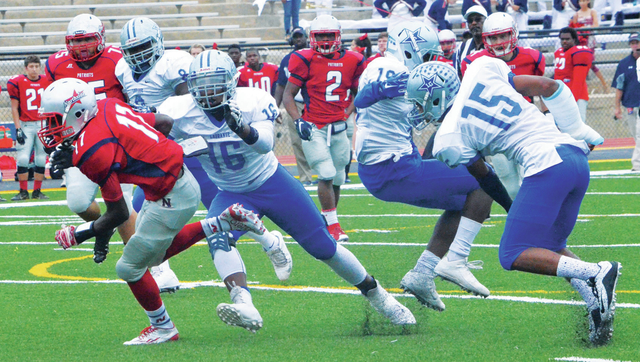 LaGrange shortstop Jake Howard makes a throw home for an out during the fifth inning of Tuesday’s 1-0 win. Kevin Eckleberry | Daily News

http://lagrangenews.com/wp-content/uploads/sites/37/2016/04/web1_LHS11.jpgLaGrange shortstop Jake Howard makes a throw home for an out during the fifth inning of Tuesday’s 1-0 win. Kevin Eckleberry | Daily News

LaGrange’s Cole Freeman races home with the go-ahead run in the sixth inning. Freeman led off the inning with a base hit. Kevin Eckleberry | Daily News

http://lagrangenews.com/wp-content/uploads/sites/37/2016/04/web1_LHS6-1.jpgLaGrange’s Cole Freeman races home with the go-ahead run in the sixth inning. Freeman led off the inning with a base hit. Kevin Eckleberry | Daily News

The LaGrange Grangers celebrate after turning a double play to get out of the top of the sixth inning without a run scoring. Hardaway had the bases loaded with no outs. LaGrange went on to win 1-0. Kevin Eckleberry | Daily News

http://lagrangenews.com/wp-content/uploads/sites/37/2016/04/web1_LHS10.jpgThe LaGrange Grangers celebrate after turning a double play to get out of the top of the sixth inning without a run scoring. Hardaway had the bases loaded with no outs. LaGrange went on to win 1-0. Kevin Eckleberry | Daily News

LaGrange’s Ben Anderson looks on after reaching on an intentional walk in the sixth inning. Kevin Eckleberry | Daily News

http://lagrangenews.com/wp-content/uploads/sites/37/2016/04/web1_LHS5.jpgLaGrange’s Ben Anderson looks on after reaching on an intentional walk in the sixth inning. Kevin Eckleberry | Daily News

LAGRANGE – With absolutely no margin for error, LaGrange High’s Jake Farrar came through with an outstanding and perhaps season-saving performance.

In Tuesday’s critical Region 1-AAAAA showdown with Hardaway, it was Farrar who was given the ball by head coach David Smart, and the senior responded in brilliant fashion.

Farrar threw a two-hit shutout, and Jake Howard had an RBI double in the bottom of the sixth inning to bring in the game’s only run as LaGrange walked away with a 1-0 victory.

The Grangers improved to 8-6 in the region, and they’re alone in fourth place with four regular-season games remaining.

LaGrange could have still made the playoffs had it dropped Tuesday’s game, but it would have been an uphill challenge.

Now, the Grangers are in a much better position to grab one of the region’s four playoff spots, although there is work left to do.

Offense was in short supply in Tuesday’s game.

The Grangers managed just four hits themselves, and after Howard’s RBI hit in the sixth inning, they loaded the bases with no outs but couldn’t score.

Thanks to Farrar, though, the one run was enough.

“I feel a lot more comfortable out there right now,” Farrar said. “I have a lot of confidence. I really want the ball.”

Farrar has been rolling of late.

Farrar tossed seven shutout innings in a 9-0 win over Shaw on April 7, and he worked two scoreless innings against Northside last week.

Farrar did run into one major trouble spot in Tuesday’s game.

In the top of the fifth inning, the Raiders loaded the bases with no outs after an error and a pair of well-placed bunts.

In a game where offense was at such a premium, the pressure was on Farrar and the LaGrange defense to find a way to keep Hardaway from scoring.

Farrar and the men behind him did their part.

The first out was recorded when Howard, LaGrange’s shortstop, fielded a hard-hit grounder and threw home for the fielder’s choice, with catcher Champ Willis making a terrific scoop and catch.

Howard, knowing how valuable one run would be, didn’t hesitate to throw to the plate.

“I knew I was going home,” he said. “Champ picked it. That was awesome.”

With the bases loaded and one out, Jonathan Manibusan made solid contact and hit the ball to the right side of the infield.

Second baseman Matthew Anderson fielded the ball cleanly, and he tossed the ball to Howard, who stepped on the bag and whipped a throw to first base to complete the double play.

“I was thinking double play the whole way,” Anderson said. “I knew Jake was going to be there. We have a good connection up the middle. It’s really nice having him there. It was a good transfer, and he was able to finish it.”

The inning began with Howard committing an error on a ground ball, but he put that behind him and came through with two pivotal defensive plays.

“We talk about that all the time, making the next one,” Smart said. “You can’t dwell on the last one. You move on to the next play. That’s a great example of it. He did a great job of making that tough play, and then turning the double play. That was the ballgame. A big momentum swing.”

Through it all, Farrar never lost his cool.

“He was phenomenal,” Anderson said. “He put the team on his back, and he didn’t let anything get to him. He had the bases loaded, and he came back and threw strikes. He was great.”

Farrar’s thinking was to “just throw strikes, and trust your defense. They helped me out a lot there.”

As exhilirating as it was to get out of a bases-loaded, no-out jam with zero runs scoring, it was still a tie ballgame.

That changed in the sixth inning.

Cole Freeman, the number nine hitter in the lineup, led off with a base hit to right field.

Next up was leadoff hitter David Sweat, and he dropped a perfect bunt down the third-base line, and when the throw to first got away, Freeman motored around to third base.

With a runner on third and no outs, Howard got a favorable count, and he drove the ball over the left-fielder’s head for the go-ahead double.

Ben Anderson was intentionally walked to load the bases, but the Grangers were unable to tack on another run.

Farrar finished the game in style, striking out all three Hardaway batters he faced in the top of the seventh, and that was that.

“He was really good,” Howard said of Farrar. “He keeps getting better every game.”

LaGrange, which still has a chance to finish second in the region with a strong finish, will visit Harris County today.

LaGrange will be at home against Harris County on Thursday, and it will travel to Hardaway on Friday.

LaGrange’s game with Carver was canceled on Monday, and when and if that game will be made up hasn’t been determined.