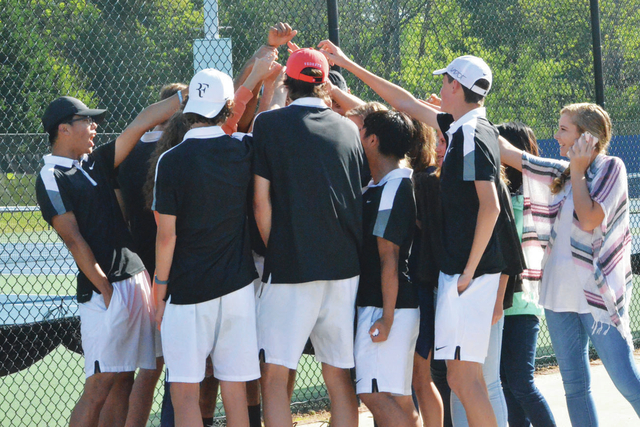 LAGRANGE – It was a suspense-free day for the LaGrange Grangers.

LaGrange easily handled Northgate earlier in the season, and those same two teams were meeting in the first round of the Class AAAAA state tennis tournament on Tuesday at the McCluskey Tennis Center.

While Northgate got a victory at number one singles, LaGrange dominated everywhere else to take a 4-1 win and advance to the second round.

LaGrange will be back home for a second-round matchup against either Villa Rica or Gainesville.

“They came in and took care of business,” LaGrange coach Kenny Moore said. “Everybody’s getting better. Maybe we can play for a couple more weeks.”

It has been an exceptional season for the Grangers (17-5), who are riding high after beating the Columbus Blue Devils last week to win the Region 1-AAAAA championship.

LaGrange kept the momentum going on Tuesday, and it is one of 16 teams remaining in Class AAAAA.

“I think we have a very good chance to go a long way,” said Pierce Skinner, who won his match at number two singles on Tuesday. “We all fit in really well to our spots, and we all work together really well. Everybody’s unselfish.”

Skinner said everything came together against Columbus last week.

Columbus won the previous two meetings between the two teams, but LaGrange turned the tables when it mattered the most.

“We were really locked in throughout practice,” he said. “We were a confident group going into that last match.”

Tiger Lakhwani, a member of LaGrange’s number two doubles team, said if he and his teammates can duplicate the showing they had against Columbus, they’ll be playing for a while.

“If we come out here and play like we did against Columbus, I feel like we can go far,” Lakhwani said.

Northgate did get one win, with Larry Sloan topping Blade Kendall 6-2, 6-0, but LaGrange won the other four matches with ease.

The story was much the same at number three singles, with Tony Choi easing past Tanner Kelly 6-0, 6-2.

In the two doubles matches, LaGrange dropped a total of one game.

At number one doubles, Connor Mahan and Jas Singh were teaming up once again.

In the region finals against Columbus, Mahan moved from singles to doubles, and he and Singh got a hard-fought win.

They were victorious again on Tuesday as they blanked Alex Waldron and Carson Crawford 6-0, 6-0.

“We had the same mindset as we had going into the Columbus game, just give it our all,” Kuerzi said.

While Kendall came up short on Tuesday, he has been an integral part of the team all season.

Being in the number one spot is a tough challenge for Kendall since he’ll usually be matched up against the opposing team’s top player, but he has handled the situation well.

“He’s been a fantastic number one player for us,” Moore said. “He’s earned that spot. He’s played real well at that spot. I’m real proud of him. If you could have seen his game two years ago to where it is now, it’s amazing.”

Kendall knows how daunting the challenge is, and on some days he’ll have a tough time keeping pace with his opponent, but he likes to test himself.

“I do enjoy it,” he said. “I don’t know if I’m necessarily qualified for it at the moment. But I enjoy a chance to play at that level.”