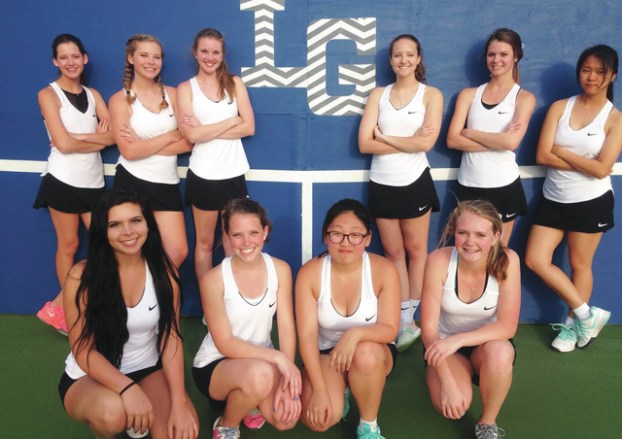 LaGrange High’s girls’ tennis team, after finishing third in the Region 1-AAAAA tournament, will visit McIntosh in the first round of the state tournament today. Contributed photo

http://lagrangenews.com/wp-content/uploads/sites/37/2016/04/web1_tennis1-3.jpgLaGrange High’s girls’ tennis team, after finishing third in the Region 1-AAAAA tournament, will visit McIntosh in the first round of the state tournament today. Contributed photo

LAGRANGE – The LaGrange Lady Grangers, fresh off a third-place showing in the Region 1-AAAAA tennis tournament, will look to keep their season alive today.

LaGrange is on the road to face McIntosh, the second-seeded team from Region 4-AAAAA.

The winner will advance to the round of 16 to face Gainesville, which beat South Paulding 5-0 in the first round.

It has been an up-and-down season for the Lady Grangers (10-11), but head coach Kenny Moore said all of the players have improved over the past few months, and he said it all comes down to their work ethic.

“I’ve never had a group of young girls work like them,” Moore said. “I text them to come meet me on Saturday, and they’re here. We meet Sunday afternoon, they’re here. They’re as eager to get better as any group I’ve had.”

LaGrange earned its spot at state by getting a pair of close wins in the region tournament.

With a state berth on the line, LaGrange outlasted Shaw 3-2, and it followed that up with a 3-2 win over Harris County in the third-place match.

Against Harris County, senior Euna Oh continued to lead the way as she has done all season with a 6-4, 6-4 win at number one singles.

That same lineup will be on the court today for LaGrange.