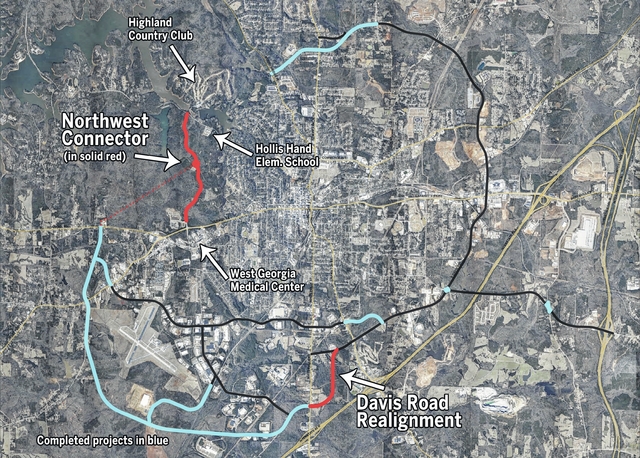 LaGRANGE — A proposed road to connect Vernon and Cameron Mill roads will go forward as planned after county commissioners Tuesday approved an intergovernmental agreement with the city of LaGrange.

The agreement, which outlines the construction and financial responsibilities of the city and county as they pertain to the road, passed unanimously with four commissioners voting in favor. Commission Chairman Patrick Crews was absent.

The road, dubbed the Northwest Connector, will pass through property owned by the Callaway Land Trust, which has agreed to donate the right-of-way. The Callaway Foundation, which is a separate entity from the land trust, has pledged $2 million toward construction. The balance, estimated to be $2.5 million, will be financed with the special-purpose, local-option sales tax, or SPLOST, approved by voters. County officials have said that cost is a rough estimate and could change.

Commissioner Tripp Foster of District 3 motioned to amend the agreement to cap the county’s expenditure on the road at $2.5 million, but the motion died for lack of a second.

The road is planned to begin at Vernon Woods Drive near the intersection of Medical Park Drive and Vernon Road. It will pass northward and end about 35o feet east of the intersection of Cameron Mill Road and Country Club Drive, just west of Hollis Hand Elementary School.

Opponents of the road — chiefly residents of the Highland Country Club neighborhood — have been vocal in their criticism of the connector, saying tax dollars are being used to finance a road that will primarily benefit the Callaway Foundation and land trust. The opponents have argued that once the road is built, the 1,682 acres of property owned by the land trust will be sold to a developer for a housing subdivision. The opponents have argued that any future developer should pay for a road, not taxpayers.

Callaway Foundation President Speer Burdette has said there are presently no plans to develop the area, but that could change in the future. Burdette has told city and county officials the road would be beneficial to the area and the Callaway Foundation and land trust stand to gain no immediate financial benefit from the project.

The opponents have also voiced concerns that the route could eventually become part of the LaGrange bypass system.

The road was originally slated to dead-end at Country Club Drive, but LaGrange City Council this month changed the route after residents asserted their concerns about the potential bypass connection. Council has directed city staff not to consider such a route, going as far as passing a resolution to that effect, but the resolution is nonbinding and cannot hold future councils responsible. Opponents have also questioned the need for the road, saying it will serve few people and has not been properly vetted and planned.

City and county roads engineers have defended the project, saying it has been in county transportation plans for more than 40 years, but the land owners — the Callaway Land Trust — have been unwilling until recently to allow the project to move forward. James Emery, Troup County’s lead roads engineer, has said the road will ease traffic on the congested Vernon Road, improve emergency response time and cut down on the number of railroad crossings commuters in northwestern LaGrange must take to reach the city center.

Construction of the road is already underway, and engineers have laid an approximate center line. Timber has been removed by a private logging company at private expense.