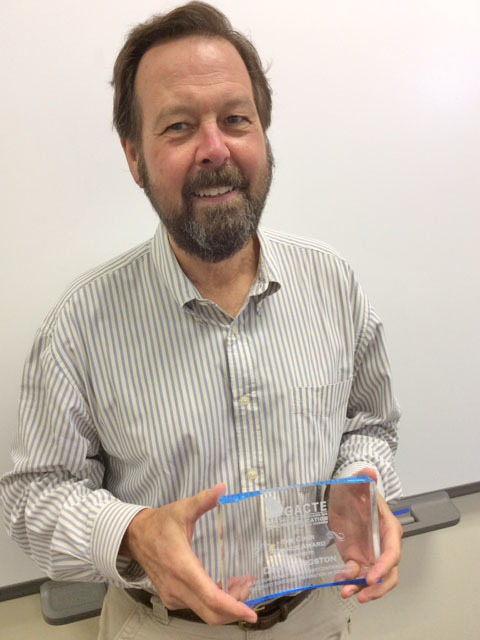 Don Livingston, chair of the education department at LaGrange College, holds the lifetime achievement award he received from the Georgia Association of Independent Colleges of Teacher Education.

http://lagrangenews.com/wp-content/uploads/sites/37/2016/04/web1_0420Livingston.jpgDon Livingston, chair of the education department at LaGrange College, holds the lifetime achievement award he received from the Georgia Association of Independent Colleges of Teacher Education.

Don Livingston, chair of the education department at LaGrange College, holds the lifetime achievement award he received from the Georgia Association of Independent Colleges of Teacher Education.

http://lagrangenews.com/wp-content/uploads/sites/37/2016/04/web1_web0420Livingston.jpgDon Livingston, chair of the education department at LaGrange College, holds the lifetime achievement award he received from the Georgia Association of Independent Colleges of Teacher Education.

LaGRANGE — From his early days as a first-grade teacher in Philadelphia to his current role as professor and chairman of the department of education at LaGrange College, Don Livingston has had a keen interest in curriculum. He also loves travel and has led study tours focusing on educational practices around the world.

Those two interests will merge Monday as Livingston presents the closing lecture of the college’s 2016 3D Journeys series, focusing on Cuba. He aims to give the audience a look at what it’s been like to go to school or teach school in Castro’s Cuba and look ahead to what the future may hold following the recent normalization of relations with the U.S.

“It is really interesting to me how a curriculum is the main instrument for enculturating the population,” he said.

Education was central to the Cuban Revolution, Livingston said.

“In some ways, education was the revolution,” he explained.

In the 1950s, Argentinian Marxist and Castro ally Ernesto “Che” Guevara embraced the concept of “liberation pedagogy,” introduced by Brazilian educator Paulo Friere. Promises of equality for all and education for the oppressed masses helped inspire the revolution that overthrew the Bautista government, the professor said.

“Friere taught that education is politics and politics is education. Che picked up on that and put it into practice.”

The result was a closed society, but one where schools are warm and child-centered, teachers are highly respected and functional literacy rates are nearly 100 percent, the highest in Latin America.

“It reminds us how dangerous ideas are — in good ways and bad ways,” Livingston said.

Now in his 15th year on the Hill, the professor grins broadly when asked how a “city boy” from Philadelphia wound up happily preparing future teachers at a small liberal arts college in Georgia.

That epic storm, still the most devastating in Philadelphia’s history, paralyzed the city and crashed the sewer system in Livingston’s neighborhood. It was the last straw. When his wife, also an educator, found an opportunity at Georgia Southern University in Statesboro, the couple chucked their snow boots and headed south.

Livingston, who had earned a bachelor’s in early childhood education from Drexel University and a master’s in elementary education from West Chester University, both in Pennsylvania, entered the doctoral program at Georgia Southern, earning his Ph.D. in curriculum studies. He joined the LC faculty in 2001 and his wife, Sharon Livingston, came on board in 2006 after completing a Ph.D. at Georgia State.

The transplanted Northerners had found a true home at LaGrange College.

“We love it here. It’s so personal. We know our students, we know the faculty. People are supportive, not cutthroat competitive.”

Livingston is a former president of both the Georgia Educational Research Association and the Georgia Association of Independent Colleges of Teacher Education, which last year gave him their Lifetime Achievement Award.

On campus, he helped launch Learn2Serve, an academic summer camp for rising fifth through eighth graders, hosted each June by the education department.

After 15 years as a “teacher of teachers,” he can walk the halls of any school in Troup County and see “room after room” led by former students. That’s both a source of pride and a huge responsibility, he said.

“I am so proud of our students,” he said. “We have made a shift, become almost clinical, and we have a much deeper connection with schools than we have ever had,” he said.

Student teaching now involves a full academic year — education majors “give up their senior year,” he said — and that translates into better prepared first-year teachers. Last year’s education grads had a 100 percent placement rate and all passed the state-mandated tests with flying colors, “way above” the state averages, he said. He expects the same results this year.

Livingston also works closely with the education department’s three graduate programs — the master of education and the specialist in education, which aim to equip veteran teachers to be “teacher leaders,” capable of improving classroom practices and changing school environments; as well as the master of arts in teaching that helps those with a four-year degree become certified as middle- or high-school teachers.

The goal is to “professionalize the occupation of teaching,” he said, and see more input from teachers in problem solving.

“I feel the winds have shifted,” Livingston said, with less “top down” decision-making and state education leaders showing more support for teachers than in some previous years.

He’s had specialist students tell him they feel re-invigorated and re-energized and hopes the April 25 lecture-goers will say the same.

3D Journeys at LaGrange College offers four free lectures annually aimed at allowing participants to “discover, discuss and develop” through lectures and optional travel. Held at 10 a.m. in the Dickson Assembly Room of Turner Hall, each lecture stands on its own and new attendees are welcome at the April 25 presentation. Parking is behind Sunny Gables, the LaGrange College Alumni House on Broad Street, with shuttle service to the door. A Dutch-treat lunch is available in Pitts Dining Hall following each session. For additional information, call 706-880-8244.